Google To Bring Wi-Fi To Hundreds Of Indian Train Stations 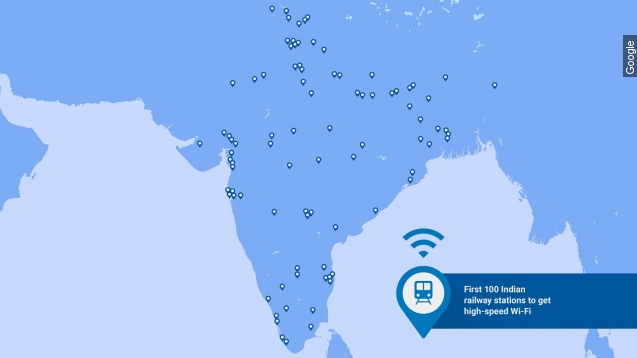 Google says there are nearly one billion people in India without access to the Internet, and it plans to do something about that.

The company announced it will make use of India's vast railway system to bring the Internet to more Indians. (Video via Indian Railways)

"What's really astounding is the fact that there are still nearly one billion people in India who aren’t online. We’d like to help get these next billion Indians online—so they can access the entire web, and all of its information and opportunity," Google CEO Sundar Pichai wrote in a blog post.

Google says it will bring public Wi-Fi to 400 train stations throughout India. It's taking a tiered approach: 100 of the busiest train stations will get Wi-Fi first, followed by the remaining 300.

And the company's not just bringing in any ol' Internet access. Google says its public Wi-Fi will be "many times faster than what most people in India have access to today." And it'll be free — though that may change in the future in order to ensure the service can expand throughout India.

Installing Wi-Fi in train stations is a pretty prosaic method for a company that usually uses far more starry-eyed approaches when attempting to fix the world. (Video via Google)

"The goal of Project Loon is to bring Internet to the almost two out of three people in the world who don't have Internet access today. And we're doing that using high-altitude balloons," said Mike Cassidy, Project Loon project lead.

But whereas Project Loon is strictly Google-based, this Indian public Wi-Fi project is part of a larger plan launched by Indian Prime Minister Narendra Modi. (Video via Narendra Modi)

Modi's initiative is called Digital India, and it actually involves several major tech companies. According to The Financial Times, Qualcomm, Microsoft and Google have all announced plans to improve India's access to technology and the Internet.