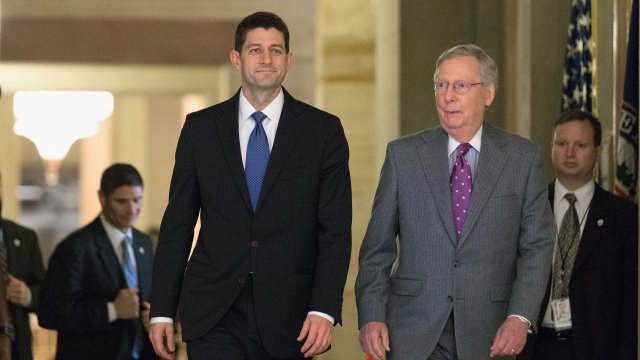 Republican leaders in Congress say the scope of the tariffs is still too broad — even with exemptions for Canada and Mexico.

Republican lawmakers are not happy about President Donald Trump's import tariffs on steel and aluminum.

Sen. Orrin Hatch told reporters he thought Congress could stop the tariffs from being implemented. And Sen. Jeff Flake said he was already working on legislation to nullify the tariffs.

While others, like Sen. John McCain, expressed concern that Trump's sharp tariffs will actually hurt the U.S. economy.

Here's What Happened The Last Time We Imposed Steel Tariffs

President George W. Bush took a crack at it ... and it didn't work out that well.

Trump signed a 25 percent import tariff on steel and a 10 percent one on aluminum on Thursday, saying it was for both economic and national security.

Canada and Mexico will initially be exempt from the tariffs, but both House Speaker Paul Ryan and Senate Majority Leader Mitch McConnell said the scope of the tariffs is still too broad.

There are a handful of Democrats who are on board with Trump's move, though. Sen. Joe Manchin said, "It's past time to defend our interests, our security and our workers in the global economy, and that is exactly what the president is proposing with these tariffs."