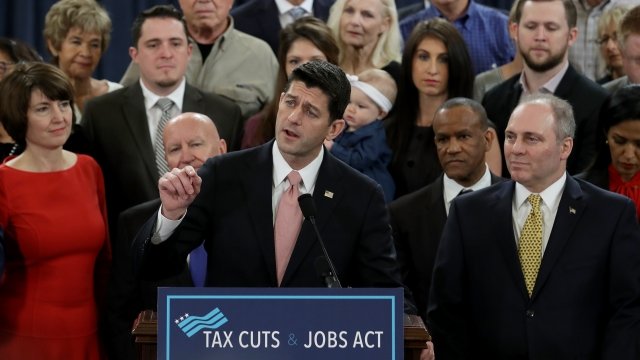 Multiple analyses have found some in the middle class could end up paying more taxes under the new bill.

Republicans have been making one consistent promise about their tax reform bill for months now: cutting taxes for the middle class.

But multiple analyses have found that's easier said than done — and that some middle-income folks would in fact see tax increases. The Joint Committee on Taxation did find that 61 percent of taxpayers would pay less in taxes over the next two years, but that by 2027 one-fifth of them would be paying higher taxes.

There are a few reasons for this. First, House Republicans have proposed replacing personal exemptions with new family credits. The former would adjust tax payments by family size.

What You Need To Know About House Republicans' New Tax Bill

Lawmakers in the House released their plan, dubbed the Tax Cuts and Jobs Act, on Thursday.

Republicans also want to get rid of some deductions that are pretty popular among folks in the middle class. Those include student loan interest deductions, medical bill deductions and the federal deductions on state and local taxes.

And Dems aren't the only ones pushing for changes. As Senate Republicans work on their own tax reform bill, some are hoping to add an even larger middle-class break and expand the tax credit.

Sens. Mike Lee and Marco Rubio are really pushing for the latter. In a New York Times op-ed, Rubio wrote: "Providing significant tax relief to working families shouldn't be a final box to check after all of the lobbyists have had their fill."

The House is hoping to vote on a tax reform bill by Thanksgiving. Republicans have promised to be completely done with tax reform by the end of the year.