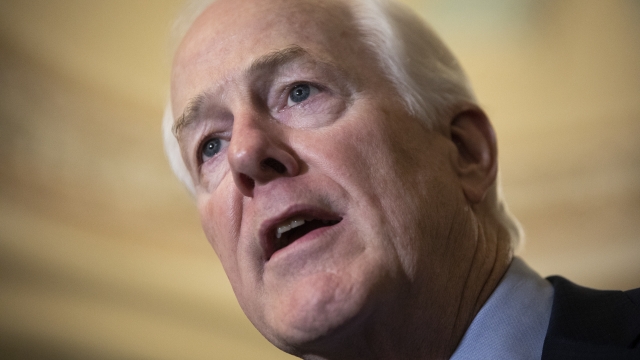 The RESPONSE Act is a plan to "reduce mass violence," but it doesn't mention gun reform measures already stalled in the Senate.

Sen. John Cornyn: "When I asked the Odessa police chief, following the shooting in Midland Odessa, what is it that you think we might have been able to do? He said, 'Well, we need better access to mental health diagnosis and treatment.' So we clearly need to do more to identify and support struggling individuals who could pose a danger to themselves and others."

It's called the RESPONSE Act. It includes plans for "giving new tools to law enforcement," "bolstering school safety for students and teachers" and "expanding resources for mental health treatment." That last part is an important one: Poll after poll has shown that Americans feel mental health plays a major role in gun violence and more resources should be allocated to address that.

According to one poll, almost 90% of Americans feel Congress should pass legislation to increase funding for mental health screenings and treatment.

Newsy previously reported on the complicated connections between mental health and mass shooters. A report titled "Mass Violence in America" released in August said that "mass violence is caused by many social and psychological factors that interact in complex ways; that many, if not most, perpetrators do not have a major psychiatric disorder; and that the large majority of people with diagnosable mental illnesses are not violent toward others." The National Council for Behavioral Health helped put together that report — and also endorses the RESPONSE Act.

What the bill doesn't include is any mention of House-passed proposals for stemming gun violence, like expanding background checks. There are already two bills related to background checks that have been stalled in the Senate since February.

Sen. Joe Manchin, a Democrat from West Virginia, said, "If you don't have a sensible commercial background check … then you don't have a foundation for a bill. If you are not even willing to put that in [a bill], then you're really not serious about doing what needs to be done."

In a call with Texas reporters, Sen. Cornyn addressed concerns of the bill's viability:

"For those who say we want you to do more, I'm happy to listen. But I'm also interested to know is how we can actually achieve the objective, because people have come up with a lot of good ideas, but then, if you can't get the votes to pass them in the House and the Senate and get a presidential signature, they don't count for very much."