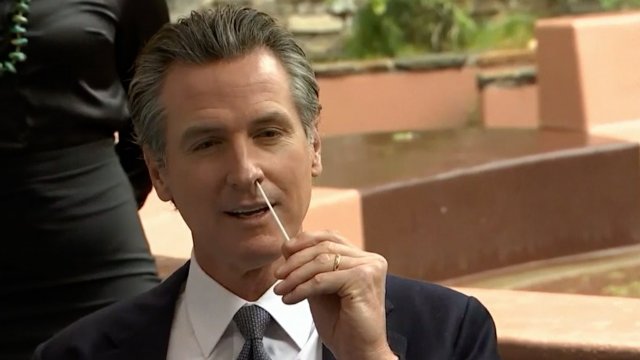 All students have to get tested before returning from winter break, with them having priority access to rapid antigen tests.

In the high desert of southern California, a triage tent has been reinstalled in the parking lot of Providence St. Mary Medical Center.

Inside, patient beds line the hallway due to lack of rooms.

"We're overly exhausted, and it's starting to look like last year at this time right now," Jahmaal Willis, with the hospital's emergency department, said. "You know, it's starting to remind me of last year. It's kind of a PTSD situation."

Last winter’s surge in California brought the state's death count to the highest in the country. Last December, 219 people died in the golden state in a single day.

With the Omicron variant raging and the hope to avoid anything resembling a repeat of last year, Governor Gavin Newsom is ordering some of the most aggressive measures in the country announcing this week that all students get tested before returning from winter break, giving them priority access to rapid antigen tests.

"They can get those results back quickly and make sure that when they go back in person they're doing so safely, knowing that they have not contracted the disease over the holidays," Gov. Newsom said.

So far, California is faring far better than many other states. In the past week it averaged 114 cases per 100,000 people, less than half the national rate.

"We continue to do more than most other states in promoting not only the safety and efficacy of our vaccines, but promoting the boosters," Gov. Newsom said.

Business groups say the governor is going too far, exacerbating the state's severe labor shortage requiring, starting in mid-January, that vaccinated workers who come in contact with someone infected with COVID wear masks and stay six feet away from others for 14 days.

Gov. Newsom also set a Feb. 1 deadline for health care workers to get a booster shot.

And now is the real test of whether the state can keep its infection rate down. Flooding rain in parts of the state and heavy snowfall in the North is keeping millions indoors, right when out-of-state family members come home for Christmas.