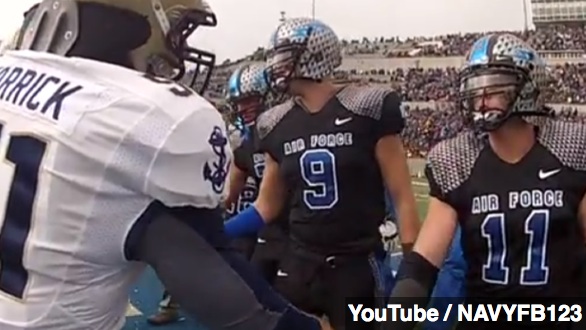 If the shutdown continues over the weekend, Saturday's sold-out game between the Navy and Air Force academies won't happen.

Could the “government shutdown” be shutting down college football? It’s very possible — for one game, at least.

If the government shutdown continues over the weekend, Saturday’s sold-out football game between the rival academies Navy and Air Force won’t happen. (Via YouTube / NAVYFB123)

A statement on Navy’s website says, “... the Department of Defense has suspended all intercollegiate athletic competitions at the Service Academies. The Naval Academy will cancel contests as appropriate and notification on Saturday's football game against Air Force will be made public prior to 12 noon on Thursday.”

“That means that Air Force, Navy and Army, Boston College in addition to all scheduled contests are off pending the outcome of the government shutdown. A lot of people are going to be upset about that.”
​“Pending. There is still room to get a deal done.” (Via NBC Sports)

Depending how long the shutdown lasts though, you could see several schools’ seasons furloughed. USA Today reports the status of Army’s game against Boston College next week is equally in jeopardy.

While lawmakers go back and forth debating the nation’s budget, 2 million non-essential government employees are currently out of a job until politicians can find middle ground. (Via CBS)

The football game between the two rival academies is scheduled to be played at 11:30 a.m. Saturday and broadcasted nationally on CBS.