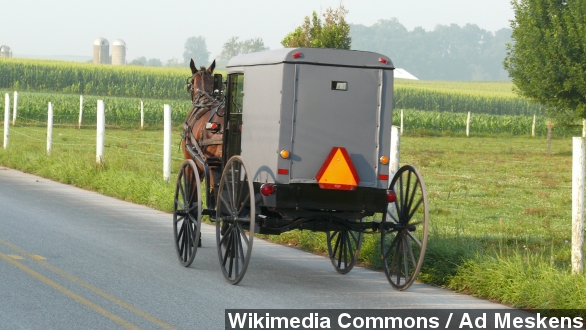 According to a family member, Sarah Hershberger, the young Amish girl whose family refused chemotherapy, is now cancer-free.

Sarah's grandfather told the Akron Beacon Journal a healthy and vibrant Sarah just celebrated her 11th birthday and tests show her cancer is actually gone. He also says Sarah is continuing natural treatments and the family is living somewhere in the U.S. in hiding.

On Thursday, outlets were reporting the Hershbergers had taken their daughter to another country to find alternative treatment. (Via Daily Mail)

According to the Akron Beacon Journal interview, Sarah's grandfather said the family did go to an undisclosed clinic for treatments, but are now back in the states. In August, Sarah's father explained to ABC why they wanted their daughter to be treated with natural products:

​"We're seeing how sick it would make her. ... Our belief is the natural stuff will do just as much as what that does, if it's God's will."

Earlier this year, the Akron Children's Hospital believed Sarah would die without chemotherapy and took the parents to court. The judge ruled in favor of the hospital and gave a nurse limited guardianship over Sarah to handle her medical decisions. (Via International Business Times)

"The family is appealing the decision to the Ohio Supreme Court. They also plan to file a motion to terminate the guardianship.​" (Via WTOL)

Despite the appeal, the guardian's attorney, Clair Dickinson, says the nurse hasn't had contact with Sarah or her parents in at least a month. Dickinson says Sarah's last known chemo treatment was in June. (Via WJW-TV)

"Doctors say her cancer is treatable, but the girl will die within the year if she doesn't get chemo."

"Their lawyer says this isn't a case of neglect and the parents want what is best for their child." (Via CANTV)

As of right now, Examiner reports neither the hospital nor law enforcement have plans search for the girl or to force her into treatment while the ruling is being appealed.

"Dickinson said there are no contempt-of-court orders or any other charges pending against the parents, despite their disappearance with Sarah." (Via Akron Beacon Journal)

ABC reports the family's attorney says family members won't disclose where the Hershbergers are living but say they won't be returning to their Ohio home anytime soon.