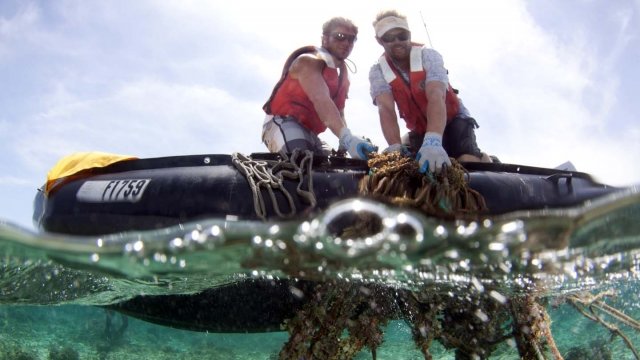 Thousands of tons of plastic are swirling around the Pacific Ocean's surface and endangering sea life.

The world's biggest patch of ocean junk is bigger than anyone thought. The Great Pacific Garbage Patch, which floats somewhere between California and Hawaii, is now estimated to have around 87,000 tons of plastic — four times more than the next highest estimate. And it's growing faster and faster.

The Great Pacific patch is the most famous of the world's garbage patches, but there are many more. They form when strong currents surround an area of the ocean and collect all the plastic that floats by.

But it's hard to estimate how much junk a patch really has, so scientists sent out hundreds of trawling expeditions, which skimmed the top of the ocean for plastic. They also collected aerial images from research planes to help make their estimates.

Ocean Plastic Could Triple By 2025

The ocean is littered with plastic, and a recent U.K. government report predicts it could get worse.

They learned a bit more about the Great Pacific patch, too. Microplastics, like small beads and crumbled pieces of bigger objects, have gotten a lot of blame for the debris problem. But the survey found larger objects account for the vast majority of the plastic weight — more than anyone realized.

The biggest contributor is fishing nets, which make up 46 percent of the total plastic weight in the patch. Beyond being a huge part of the garbage problem, these lost and discarded nets also entangle and kill untold numbers of ocean animals.

The research comes from an organization called The Ocean Cleanup, which intends to start skimming huge amounts of debris from the patch this summer. The group estimates it can clean up 50 percent of the patch's plastic in five years.