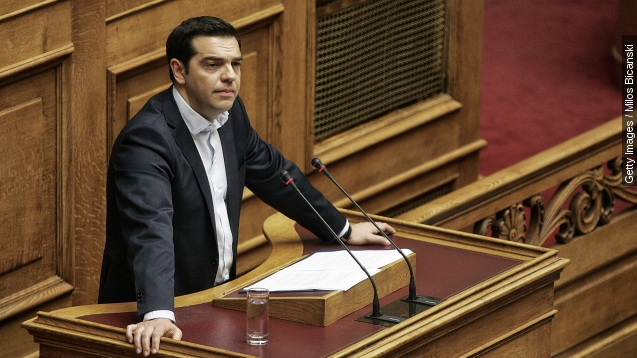 In a vote that happened after midnight, Greek lawmakers approved new austerity measures required as a part of a nearly $100 billion bailout deal.

Greek lawmakers gave a reluctant "yes" to further austerity measures as part of a nearly $100 billion bailout package from the European Union.

The approval from the Greek Parliament came after a debate that lasted well past midnight. Greek Prime Minister Alexis Tsipras battled some within his own party to earn enough votes to pass the measures — which he previously opposed.

While lawmakers voted inside, demonstrators clashed with police outside, with some hurling homemade bombs. Many were frustrated over the reforms, which would cut pensions and raise taxes, and the fact that the deal is similar to one Greek voters rejected less than two weeks earlier.

The deal comes just as Greece is facing a debt payment to the European Central Bank it can't hope to make without the bailout. Greece owes $330 billion to its creditors.