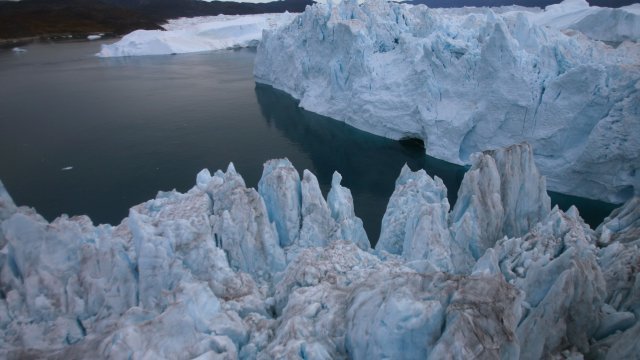 An unusually large fire has burned for two weeks on icy Greenland.

A massive fire that's been burning in Greenland for at least two weeks has scientists shaking their heads.

The fire is in the country's western region, and as of Aug. 16 was just 40 miles from the Greenland ice sheet. It's unusual because of its large size — about 3,000 acres — and the length of time it's been burning.

There have been no definitive reports on what started the blaze. It first appeared on satellite radar July 31, but could have started before then.

And while scientists may not know exactly when or how the fire started, they do have pretty strong ideas about its implications.

They suspect it will exacerbate the melting of Greenland's already dissolving ice sheets.

Researchers say if soot from the fire settles on the ice, it will decrease the deflection of heat from the sun.

That means more heat will be absorbed into the ice, increasing melt.

Scientists at the Netherlands' Delft University of Technology say it's been the worst year for wildfires in Greenland in 18 years.

Climate change is also expected to contribute to larger, longer-lasting fires in Greenland's future. That's not great news, considering Greenland is the largest global contributor to rising seas. If its entire ice sheet were to melt, the water could flood or submerge much of the world's coasts.