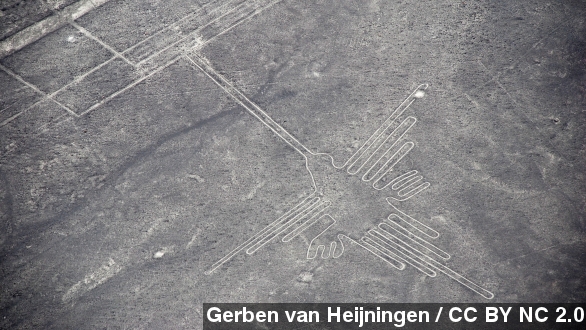 After trespassing on the Nazca lines to erect a banner, Greenpeace is facing criminal charges because the government says the group damaged the site.

If Greenpeace was expecting publicity for a stunt it pulled on Peru's famous Nazca lines, it probably should have also been expecting criminal charges.

And the Peruvian government has dutifully obliged after activists trespassed on the site of the lines to put up a banner reading "Time For Change! The Future Is Renewable," and signed the message, "Greenpeace." (Video via The Guardian)

The Peruvian government alleges the group damaged the lines, and the country's culture minister said the group never consulted the government before the stunt because they knew it was illegal. (Video via RPP Noticias)

While Greenpeace has apologized to those who feel "morally affected" by the stunt, it contests that no damage was done and its members were careful.

Still, they were acting under the cover of darkness, and aerial images clearly show the ground is smudged where they put the letters.

That's not exactly surprising, considering the dry, arid climate of the site, which has allowed for the lines to be preserved for thousands of years. (Video via Google)

The stunt has been one of the more eye-catching events to come out of the U.N.'s climate conference, which is currently taken place in Lima.

In fact, it's partially overshadowed significant news like that the U.N.'s Green Climate Fund, set up to help developing nations adapt to climate change, met its $10 billion goal.

To better understand why the country is so angry about the stunt, it's worth considering that in addition to being one of the country's most recognizable landmarks, it also has to do with Peru's national identity.

Researchers theorize the lines were made by religious processions, but an unsupported theory that they were made by aliens has retained popularity since it first emerged in the 1960s. (Video via Discovery Channel)

Another pre-Columbian marvel, Machu Picchu, is also sometimes chalked up to aliens, a theory which many Peruvians see as discrediting the ability and intelligence of the indigenous people who actually built the sites. (Video via YouTube / devinsupertramp)

Peruvian authorities say they're using the records from the airplane company contracted to photograph the stunt to track those involved, who could face up to eight years in prison.