Where Is Trump Getting His Widespread Voter Fraud Evidence? 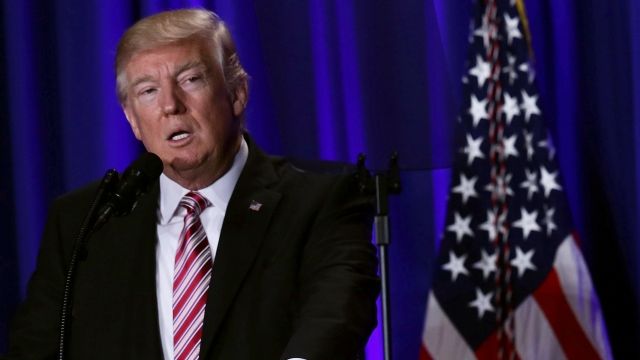 One source is an avid Tweeter; the other's a pro golfer. And they still haven't provided any evidence.

Gregg Phillips is the founder of VoteStand, an app that allows people to report election fraud. Just days after the presidential election, Phillips claimed he had proof 3 million people who aren't U.S. citizens had voted.

According to the Statesman, Phillips was previously an executive at the Texas Health and Human Services Commission. And according to one of his tweets, he wasn't an early supporter of Trump, but he apparently "investigated" Bill and Hillary Clinton for "20 years."

Phillips and his team still haven't offered any evidence to back up their claims. In his appearance on CNN on Friday, Phillips said they were still verifying their information despite tweeting out a conclusion over two months ago.

But President Trump appears eager to see his report, based on a tweet he sent Friday morning shortly after Phillips' CNN appearance.

Trump reportedly told congressional leaders at the White House on Monday he would have won the popular vote had millions of people not voted illegally.

According to a report published in The New York Times on Wednesday, Trump's evidence to back up his claims to congressional leaders was a story told to him by German pro golfer Bernhard Langer.

According to the story, someone standing in line at a polling place was told he wasn't allowed to vote. But people standing around him in line "who did not look as if they should be allowed to vote" were given the chance to cast provisional ballots. Sources differed as to whether the story was about Langer or a friend of his.

Langer released a statement later in the week saying he wasn't the one standing in line. He said he heard the story from a friend, then conveyed it to someone with ties to the administration. He also pointed out he can't vote in the U.S. because he's a German citizen.

Trump and the White House have repeatedly stuck by his claim, despite not presenting any evidence to back it up.

On Wednesday, Trump tweeted that he would ask for an investigation into voter fraud.