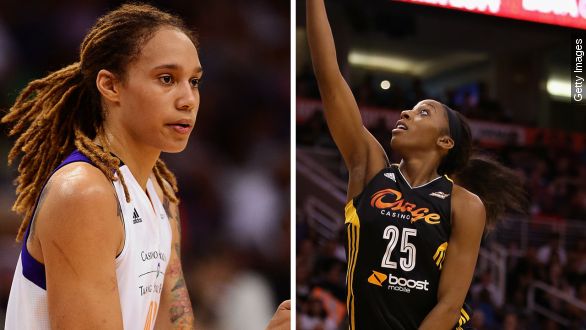 The arrests of Brittney Griner and Glory Johnson will test how the WNBA handles domestic violence after similar incidents emerged in other leagues.

Another sports superstar has been arrested after a domestic violence incident. But in this case, we haven't heard the same cries for a suspension that we did with NFL superstars Ray Rice, Greg Hardy and others.

Brittney Griner is one of the most high-profile players in women's basketball, and on Wednesday, she and her fiancee — fellow WNBA player Glory Johnson — were arrested on assault and disorderly conduct charges after getting in a fight with each other.

The WNBA said it's working to find out more information on the incident, but what exactly should the punishment be?

Back in September, congressional leaders sent a letter to the NFL and copies to the MLB, NHL, NBA and MLS asking their leaders to make their domestic violence policies public.

Here's the thing: The letter was not sent to any women's professional sports leagues, and they are not exempt from the problem.

Former WNBA first-round draft pick Chamique Holdsclaw and U.S. women's national team goalie Hope Solo have both faced domestic violence allegations. However, neither was punished by her respective league because Holdsclaw was retired and the charges against Solo were dropped.

ESPNW columnist Kate Fagan spent weeks with Griner preparing for a story. Fagan said she was surprised to hear of the incident but believes the WNBA will take the time to handle the situation properly:

"I think the WNBA right now is going to have to be smart about how they react, but they do have a little bit of time because these players are out of season."

If the WNBA is anything like the NFL, MLB or NHL, the suspension could vary from an indefinite suspension to one that is determined by the league's president.