Group Of Engineers Works To Improve Conditions For Refugees 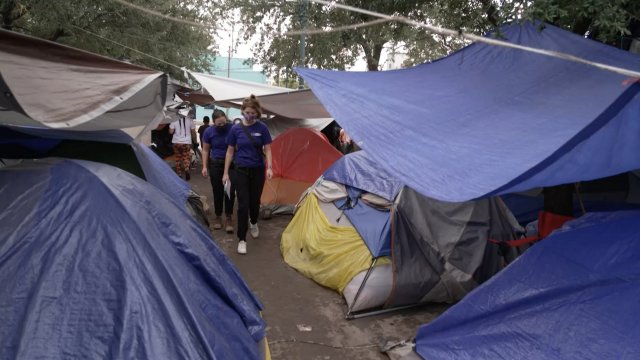 Solidarity Engineering, made up of three female engineers, is trying to bring cleanliness and clean water to crowded border camps.

A park in Reynosa, Mexico, is now home to roughly 3,000 asylum seekers on any given day, praying to be allowed just steps away into the United States. Katterín Chavez fled violence and death threats in her native Honduras after her brother was murdered. She had held an office job there, and now she's chief among a crew of hygiene workers at the camp.

Cleanliness is a luxury at the ever-growing, crowded camp, but three women, all engineers, are trying to change that by helping thousands stay relatively clean and disease-free.

"We kept solidarity in our name to remind ourselves every day that you need to be working hand in hand with the people that you're serving," Cook said.

They do their own fundraising to further their projects and keep the mission afloat.

"We provide what we can, but it's not nearly enough," Hughes said.

"As far as we know, we are the only engineers on the U.S.-Mexico border, which is crazy because water sanitation and hygiene is one of the biggest needs in camps. The first thing people set up is wash systems," Rastatter said.

They've helped install portable toilets and water tanks in the streetside camp and have fostered a working relationship with local authorities to help clean out the portable toilets.

But the trio isn't just concerned about the cleanliness inside the camp. Solidarity Engineering is also helping in education, with Cook tutoring the young children in math and science several times a week. And they want to address the prospect of sexual violence against the women who have to stay there.

"I think it's a huge advantage of our group and really important as a humanitarian aid organization to be talking to women specifically about measures that can be taken to protect them from sexual and gender-based violence, especially when we're building wash infrastructure," Rastatter said. "Places where people are alone in vulnerable bathrooms and showers are extremely dangerous places for women."

They're also working to improve sanitation at a migrant camp a mile west called the Senda de Vida shelter. Migrants there live in safer conditions, led by Pastor Hector Luna, but Solidarity Engineering has grander ambitions at the camp.

They hauled an AquaBlock system from the camp at which they originally built water infrastructure. That camp dissolved when migrants inside were allowed to cross into the U.S. Their goal is to have clean drinking water and plumbing for washing, as well as water routed to the men's and women's showers.

For now, the women help asylum seekers like Katterín Chavez who are stuck outdoors.

"We thank all the people who bring these items because without their help it would not be possible to have any clean, tidy bathrooms," Chavez said.

The group says they hope their work changes American hearts and minds about asylum seekers.

"My friends and family, my acquaintances, they genuinely don't know what's happening," Rastatter said. "They know on a very surface level ... that there's a lot of people stuck on the U.S. border, but they have no idea how dangerous it is."