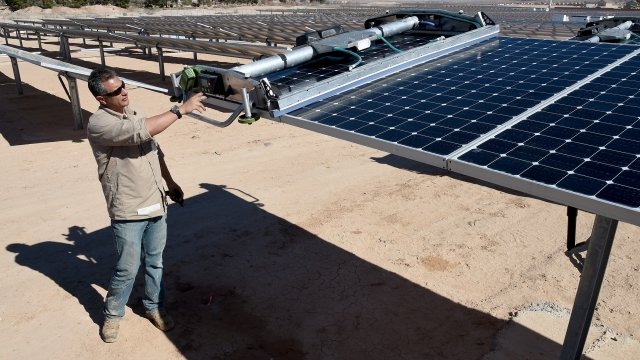 Employing close to 3.4 million people worldwide, the solar energy industry is expanding — but its diversity is lacking.

The solar energy industry — or more specifically solar photovoltaic, or PV — is one of the fastest-growing sectors in renewable energy, employing close to 3.4 million people globally. Despite a slight dip in employment in the U.S. last year, the industry is growing worldwide. But something is missing: diversity.

California Is On Track To Require Solar Panels On New Homes

But it's not just the solar industry. There is a lack of diversity in various other energy sectors. The utility and oil- and gas-extraction industries are both about 85 percent white.

Charles Simpson, an African-American welder's helper for a pipeline company, tells Allegheny Front: "The racism in this job is unreal, is unchecked, and I believe is designed to scare individuals off."

More expensive solar panels might cost jobs and immediate growth, but the market is expected to keep climbing in the long term.

The NAACP is calling on the solar industry to help pave the way for diversity. This year, it launched a Solar Equity Initiative that focuses on environmental, economic, gender and racial advancement. Actress Rosario Dawson partnered with NAACP to help promote the new solar initiative.

Dawson said in a video, "By installing solar in low-income households and community centers while training 100 people with an emphasis on women, formerly incarcerated persons, and veterans, they will also work to strengthen solar policies around the country to shift political power."