Guardian Under Fire From U.K. Gov't Over Snowden Leaks 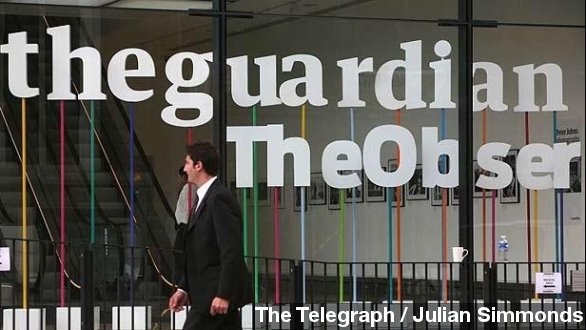 Unlike the U.S., the United Kingdom lacks an almost-absolute freedom of expression for the press, putting The Guardian newspaper in the hot seat.

Although Edward Snowden might be beyond the reach of Western governments looking to prosecute him, the papers that published his leaks are still an available target to the officials who say they’ve endangered national security. The U.K. asked The Guardian to destroy hard drives containing Snowden data. (Via Al Jazeera, Press TV)

The paper complied, but that only added fuel to the fire headed its way.

CAMERON: “What has happened has damaged national security, and in many ways, The Guardian themselves admitted that, when they agreed … to destroy the files they had.” (Via The Guardian)

In regard to The Guardian, British Prime Minister David Cameron went on to say, "If they don't demonstrate some social responsibility it would be very difficult for government to stand back and not to act." (Via The Huffington Post)

Scotland Yard has also said it might open a criminal investigation of the paper. And Tuesday, The Guardian’s top editor, Alan Rusbridger, will appear in front of a parliamentary committee in the U.K. to explain his paper’s actions.

Speaking to The Washington Post, the American paper that published similar leaks but hasn’t faced nearly the same level of government backlash, Rusbridger said, “Some of this behavior is clearly designed to be intimidatory and/or chilling. Most of it would be unimaginable in America or parts of Europe.”

The U.K. has typically been hesitant to meddle in media affairs, but it doesn’t have an almost- absolute right to press freedom like the U.S.’s First Amendment. That opens The Guardian up to all sort of trouble. (Via Sky News)

And its journalists and their family members. Back in August, British authorities detained David Miranda at Heathrow Airport. Miranda was carrying data to give to his partner, then-Guardian reporter Glenn Greenwald — data confiscated under national security concerns. (Via The Verge, The Telegraph)

The government’s crackdown on The Guardian has drawn the ire of the U.N. official responsible for freedom of expression, who said last month, “I have been absolutely shocked about the way the Guardian has been treated … I think that is unacceptable in a democratic society.” (Via RT)

The World Association of Newspapers and News Publishers has also announced plans to send a delegation to the U.K. to protest the government’s treatment of The Guardian.