Gunman At Large In Paris After Newspaper Shooting 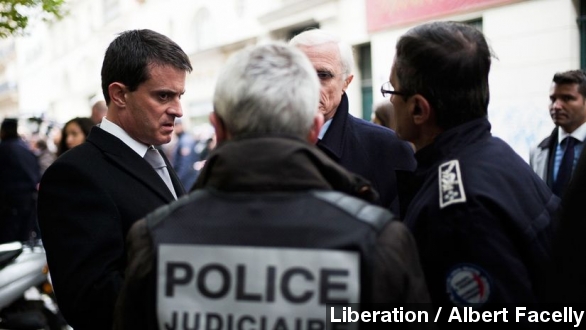 A manhunt is underway in Paris following a hostage situation and a string of shootings throughout the capital.

A manhunt is underway in Paris following a hostage situation and  a string of shootings throughout the capital.

A photographer at the left-leaning daily newspaper “Liberation” is in critical condition after a gunman opened fire on the the paper's office. Authorities haven't released the 27-year-old photographers name, though he is said to be fighting for his life after bullet wounds to the chest and stomach. (Via Euronews)

The newspaper’s editor told reporters the gunman fired two or three shots before fleeing on foot. (Via Sky News)

About 90 minutes later, police were called to a French bank in western Paris after reports of another shooting. The gunman then took a motorist hostage — reportedly telling him he was armed with grenades before letting him go. (Via TFI)

Police say they believe that gunman is responsible for both attacks, but they’re unsure of a motive.

Liberation reported on its website shortly after the shooting, the suspect had a shaved head and looked to be about 40-years old. (Via Liberation)

According to police, that matches the description of the suspect in a separate shooting at French 24 hours newschannel BFMTV on Friday. (Via Le Parisien)

Police say they don’t yet know if that's in any way related. But the BBC reports the gun cartridges found at the scene of Monday’s shooting don’t match those found Friday.

The nation's media are on high alert. Journalists on Twitter reported police stationed at their media outlets, as well as enhanced security presence throughout the city.  (Via Twitter / @nicolaspoincare, Twitter / @marcobindler)

French President Francois Hollande, who is overseas on a visit to Israel, said in a statement France would use all means necessary to find the gunman.