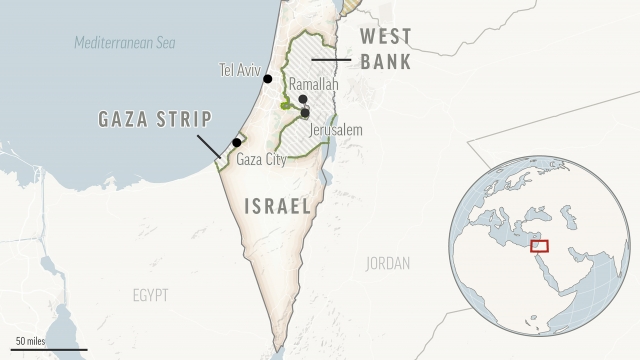 Two of the men, both members of the Palestinian security forces, were killed by firing squad, and the other three were hanged at dawn.

The Interior Ministry said the executions meant "to achieve public deterrence and security," but rights groups in the past have questioned fair-trial standards in the military and civilian courts of the Islamic militant group.

Two of the men, both members of the Palestinian security forces, were killed by firing squad, and the other three were hanged at dawn at a security site in Gaza City.

The executions were the first since Hamas executed three Gazans after a hasty trial in the killing a leader of the group in 2017.

At least 85 Palestinians have been killed by Israeli forces this year in the West Bank, making it the deadliest year since 2016.

The Palestinian Authority, based in and exerting limited self rule in the Israeli-occupied West Bank, signed onto international treaties banning capital punishment in 2018.

Two of those put to death Sunday, ages 44 and 54, were charged with collaborating with Israel and providing it with information that aided the Israeli military in striking targets in Gaza, the ministry said. They had been detained since 2009 and 2015, respectively.

The three others were found guilty of murder in separate cases, including one man who allegedly took part in a shootout that killed a man and a teenage girl during a family dispute in July.

Hamas and Israel have fought four wars and numerous smaller engagements since 2007, the most recent in May 2021. Israel, the United States and the European Union consider the group a terrorist organization for its attacks targeting Israeli civilians.