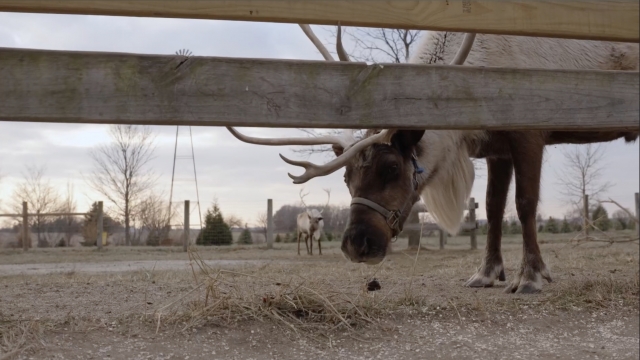 Hardy's Reindeer Ranch in Rantoul, Illinois, offers a close-up look at what Santa's helpers are really like.

Tucked away in the small town of Rantoul, Illinois, is the home of some of Christmas' biggest names.

Comet, Blitzen and Vixen, along with 18 other reindeer, live at Hardy's Reindeer Ranch, where Julie Hardy and her daughter Jenna offer a close-up look at what Santa's helpers are really like.

Dive Into An Underwater Winter Wonderland

An aquarium in New Jersey features a diving Santa and an underwater Christmas tree.

"I'm a city girl with a marketing background and I married a guy in the middle of nowhere with a Christmas tree farm," Julie Hardy said. "So it was kind of a marketing idea: Let's go out to Alaska and buy a herd of reindeer. They are domesticated. Let's figure out how to raise them in the middle of central Illinois."

Hardy and her husband Mike spent a week in Alaska learning how to care for the reindeer before bringing them back.

And yes, reindeer really do fly.

"My husband and I went to Alaska and put them on an airplane through Delta Air Lines," Hardy said. "The only time that we could fly them in is when their antlers fell off. Every year they lose their antlers and grow a new set."

Climate change has decimated herds of reindeer and caribou by 56% over the past two decades, according to the National Oceanic and Atmospheric Administration's 2018 Arctic report card.

Warm temperatures bring on more bugs to fend off and make food harder to come by, causing the reindeer population to drop from 4.7 million to just over 2 million.

As for Hardy's Reindeer Ranch, the herd is growing, with five calves joining the family this year.