Have A Sleeve Of Tattoos? The US Navy Still Wants You 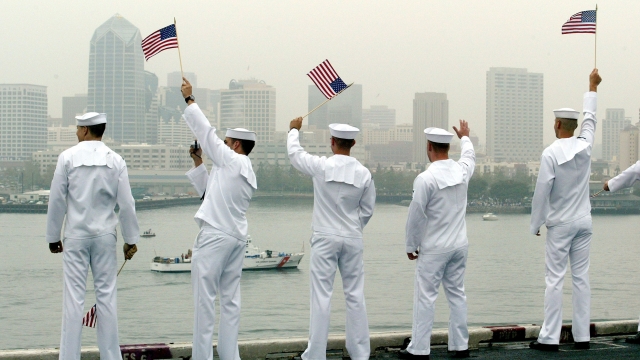 The U.S. Navy announced it's loosening its current tattoo policy to allow more ink on a person's arms, legs and neck.

In an effort to recruit more people, the U.S. Navy just eased up on its tattoo restrictions.

It announced Thursday that sailors will be now be allowed to have tattoos below their elbows and knees and one on their neck. The single neck tattoo cannot be larger than one inch, but the size of the others are no longer restricted.

Sailors who have sleeve tattoos will also be eligible for recruiting and training positions.

The Navy is still very strict about what type of tattoos sailors can have: Any tattoo that is sexually explicit, obscene or advocates discrimination is not allowed. Neither is any body art that is affiliated with gangs, extremist groups or drug use.

This is the most lenient tattoo policy for any branch in the military.

The U.S. Army did ease restrictions in 2015 to allow arm and leg tattoos, but none are allowed on a person's neck or hands.

A recent survey found almost 25 percent of Americans have at least one tattoo, with the majority of participants saying they got their first tattoo between the ages of 15 and 19.

According to the Navy Times, the tougher tattoo restrictions have been in place for 13 years.

Master Chief Petty Officer of the Navy Mike Stevens told the publication, "We just got to the point where we realized we needed to be honest with ourselves and put something in place that was going to reflect the realities of our country and the needs of our Navy."

The new tattoo policy, which goes into effect April 30, only applies to sailors, so any Marines who are serving with the Navy are excluded.