Hawaii's Missile Alert Happened Because Someone Hit The Wrong Button 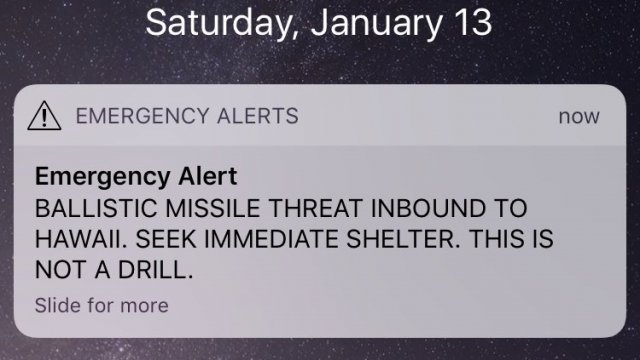 An employee at the Hawaii Emergency Management Agency accidentally pushed the wrong button, alerting the island chain of an incoming missile.

On Saturday, people in Hawaii got a pretty big scare when they received an emergency alert warning them of an incoming ballistic missile.

It turned out to be a false alarm. Officials say a Hawaii Emergency Management Agency employee accidentally pushed the wrong button.

It's holding a briefing on the topic next week.

The agency says it does internal tests at every shift change and that the employee sent the alert — even clicking through a safeguard meant to prevent such a thing.

If there's a silver lining here, it's that officials say they're already improving the system. They say they'll require two-factor identification for sending alerts in the future and that they're reviewing some glitches they noticed in the alert system.