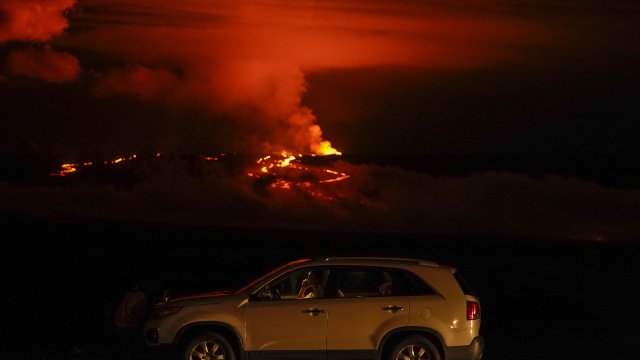 A blockage of the road would pose problems, especially for those who use it to commute from Hilo and other parts of the island's east side.

Red-hot lava is creeping towards Saddle Road, which connects the cities of Kona and Hilo and runs past along the now-erupting Mauna Loa volcano.

Ken Hon, scientist in charge at the Hawaiian Volcano Observatory, said the flow has "slowed considerably" and on Thursday was 3.3 miles south of the highway.

The eruption of Mauna Loa wasn't immediately threatening towns, but officials told residents to be ready for worse.

At that rate, he said, it would be at least a week before it arrives.

A blockage of the road would pose problems, especially for those who use it to commute from Hilo and other parts of the island's east side, where housing is generally more affordable, to jobs on the west side, home to many of the larger beach resorts.

Unless some sort of bypass is constructed, commuters would need to take coastal routes to and from Kailua-Kona, adding at least an hour drive time each way.

Gov. David Ige has issued an emergency proclamation to allow responders to arrive quickly or limit access as needed.

If lava does cross the highway, the Hawaii National Guard can help plan for alternatives and try to set up bypass routes, the governor said.