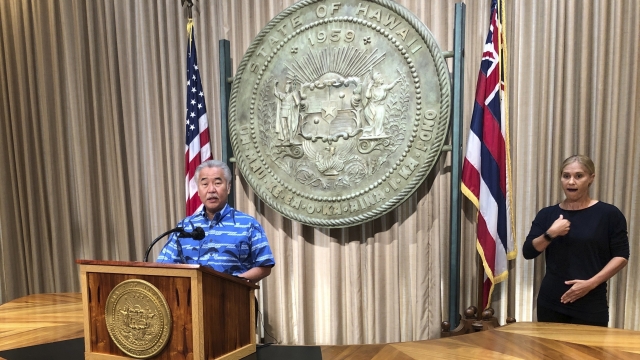 Hawaii Democratic Gov. David Ige is the latest to sign an order in response to conservative states that have adopted abortion bans or restrictions.

Hawaii Democratic Gov. David Ige signed an executive order Tuesday that aims to prevent other states from punishing their residents who get an abortion in the islands and stop other states from sanctioning local doctors and nurses who provide such care.

Ige is the latest Democratic governor to take such a step in response to conservative states that have adopted bans and tight restrictions on abortion. The push for more abortion restrictions accelerated after the U.S. Supreme Court in June overturned Roe v. Wade which had guaranteed a federal right to abortion for nearly 50 years.

Hawaii law allows abortion until a fetus would be viable outside the womb. After that, it's legal if a patient's life or health is in danger. The state legalized abortion in 1970, when it became the first in the nation to allow the procedure at a woman's request.

Hawaii officials don't expect many people will travel to the islands solely to get abortions, given how far it is from the continental U.S. and how expensive it is to fly here.

Even so, Dr. Reni Soon said since the Supreme Court's ruling, she has already provided abortions to residents of Texas, Georgia and Louisiana.

She noted Hawaii gets a large number of tourists. The order could also protect college students and military personnel and their dependents who maintain residency in other states while they are in Hawaii temporarily.

The high court declined to take up a case out of Rhode Island over whether fetuses should have constitutional rights.

State Rep. Linda Ichiyama expressed concern about moves by other states to sanction or discipline doctors and nurses who are licensed in multiple states. Hawaii medical professionals targeted in this way could lose their ability to practice in the islands.

Soon said this could have a chilling effect and deter medical professionals from providing abortion care to anyone in Hawaii.

"This is actually about protecting our access here for both in-state and out-of-state patients," Soon said.

Ige's order directs the state Department of Commerce and Consumer Affairs work with professional licensure boards to ensure no one loses a license for providing reproductive health care so long as the services provided were lawful and consistent with standards for good professional practice in Hawaii.

The order prohibits executive agencies and departments from sharing medical records, billing and other data to other states in relation to reproductive health services legally provided in Hawaii. Ige said Hawaii also wouldn't provide information about family members or friends who help people get abortions.

Democratic governors of Colorado and North Carolina in July issued executive orders to protect abortion providers and patients from extradition to states that have banned the practice.