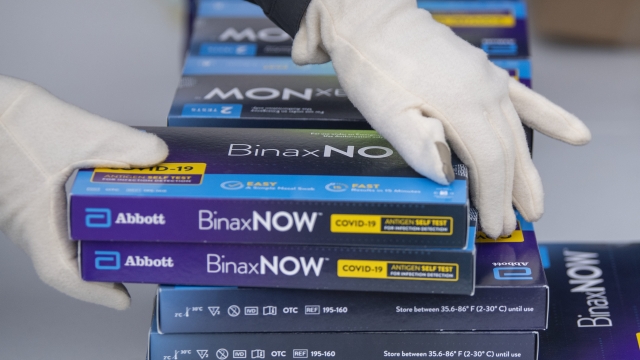 Starting Saturday, private health insurers will be required to cover up to eight home COVID-19 tests per month for people on their plans. The Biden administration announced the change Monday as it looks to lower costs and make testing for the virus more convenient amid rising frustrations.

Americans are spending more on health care today than at any time in nearly four decades. Premiums are up about 22% in just the past five years.

Under the new policy, first detailed to the AP, Americans will be able to either purchase home testing kits for free under their insurance or submit receipts for the tests for reimbursement, up to the monthly per-person limit. A family of four, for instance, could be reimbursed for up to 32 tests per month. PCR tests and rapid tests ordered or administered by a health provider will continue to be fully covered by insurance with no limit.

President Joe Biden faced criticism over the holiday season for a shortage of at-home rapid tests as Americans traveled to see family amid the surge in cases from the more transmissible Omicron variant. Now the administration is working to make COVID-19 home tests more accessible, both by increasing supply and bringing down costs.

Later this month, the federal government will launch a website to begin making 500 million at-home COVID-19 tests available via mail. The administration also is scaling up emergency rapid-testing sites in areas experiencing the greatest surges in cases.

The insurer-covered testing would dramatically reduce costs for many Americans, and the administration hopes that by easing a barrier to more regular at-home testing, it can help slow the spread of the virus, get kids back into school more quickly and help people gather safely.

The administration is trying to incentivize private insurers to cover the tests up-front and without a cumbersome reimbursement process. Insurance plans that work with pharmacies and retailers to cover the up-front costs of the tests will be required to reimburse only up to $12 per test if purchased through an out-of-network retailer. Plans that don't move proactively to set up a network of pharmacies would have to cover the full retail price that the customer paid — which could be more than $12 per test.

President Biden announced the federal requirement late last year, and it kicks in Jan. 15, but the administration had been silent until now on details of the plan.