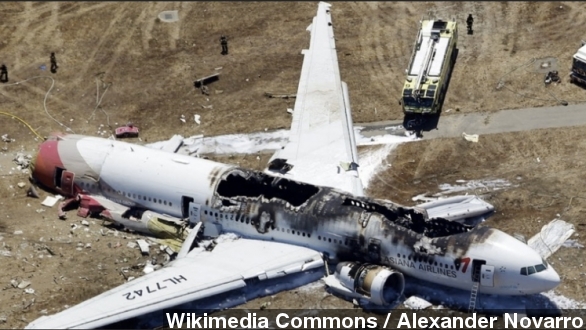 Investigators heard analysts saying pilots may be too reliant on automated systems without understanding how those systems work.

Officials began hearings Wednesday to determine why an Asiana Airlines flight crashed while landing in San Francisco in July, and they began by releasing a new video of the crash itself.

The plane collided with the seawall after coming in too low and too slow to make a safe landing. Three people died as a result, and the National Transportation Safety Board is trying to determine what went wrong. (Via MSNBC)

Wednesday's hearing covered a lot of topics, but the big ones were pilot training and the use of automated systems in flights. (Via Twitter / @NTSB)

Captain Lee Kang Kuk was still a novice at piloting the Boeing 777 and had never landed one at San Francisco's airport before. To make matters worse, a piece of runway equipment designed to guide pilots was offline due to construction. (Via CNBC)

So the pilot had to make a visual landing, which he says he wasn't comfortable with.

"The pilot whose plane crashed in July told investigators he was stressed and — I'm quoting now — 'very concerned' about attempting the visual approach to the runway there." (Via NewsChannel 8)

Lee told the board "everyone else had been doing the visual approach" and if he didn't, he would be embarrassed, citing cultural biases against acknowledging weakness. (Via Air Transport World)

The stress, coupled with Lee's own professed unfamiliarity with the 777's automated systems, led to a fatal mistake.

Bloomberg reports he "had momentarily adjusted the power without realizing the plane's computers then assumed he wanted the engines to remain at idle. ... The documents ... raise questions about how auto-throttles on Boeing planes are designed and whether there's enough training on using them."

Investigators say the point of the hearing isn't to assign blame, but industry analysts say it's raising questions about whether pilots are too reliant on automated systems without being fully trained on how they work.

Pilot Chesley "Sully" Sullenberger, who famously landed a US Airways flight safely on the Hudson River after the engines lost power, says this crash shows that pilots need to be able to take over when those systems fail. (Via CNN)

"It's important that the pilots have the skills to monitor each other and the automation, and when it's not doing what it should, having the skill and the confidence to intervene and fly the airplane manually and fly it well." (Via WINK)

Boeing engineers testifying at the hearing say their equipment is meant to aid, not replace, pilots.