Heat Warnings In Effect For Millions Until This Weekend 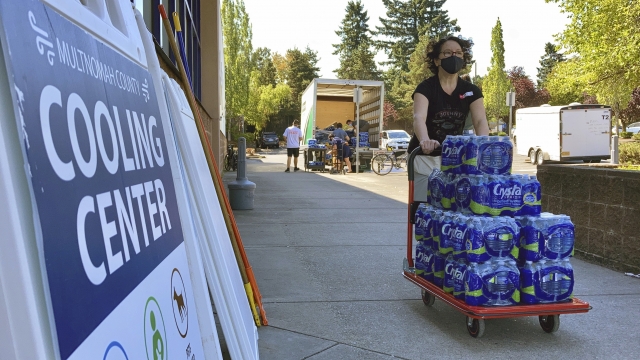 174 million Americans are under the threat of dangerous heat.

Volunteers and county employees set up cots and stacked hundreds of bottles of water in an air-conditioned cooling center in a vacant building in Portland, Oregon, one of many such places being set up as the Northwest sees another stretch of sizzling temperatures.

Scorching weather also hit other parts of the country this week. The weather service said heat advisories and warnings would be in effect from the Midwest to the Northeast and mid-Atlantic through at least Friday.

In Portland, tempertures neared 100 degrees Fahrenheit on Wednesday and the mercury could soar past the century mark Thursday and Friday. Authorities trying to provide relief to vulnerable people are mindful of a record-shattering heat wave earlier this summer that killed hundreds in the Pacific Northwest.

The high temperatures in Portland, part of a usually temperate region, would break all-time records this week if the late June heat wave had not done so already. Seattle will be cooler than Portland, with temperatures in the mid-90s, but it still has a chance to break records, and many people there, like in Oregon, don't have air conditioning.

People began coming into a 24-hour cooling center in north Portland before it opened Wednesday.

The first few people in were experiencing homelessness, a population vulnerable to extreme heat. Among them was December Snedecor, who slept two nights in the same center in June when temperatures reached 116 F.

She said she planned to sleep there again this week because the heat in her tent was unbearable.

"I poured water over myself a lot. It was up in the teens, hundred-and-something heat. It made me dizzy. It was not good," Snedecor said of the June heat. "I've just got to stay cool. I don't want to die."

Oregon Gov. Kate Brown has declared a state of emergency and activated an emergency operations center, citing the potential for disruptions to the power grid and transportation. Besides opening cooling centers, city and county governments are extending public library hours and waiving bus fare for those headed to cooling centers. A 24-hour statewide help line will direct callers to the nearest cooling shelter and offer safety tips.

The back-to-back heat waves, coupled with a summer that's been exceptionally warm and dry overall, are pummeling a region where summer highs usually drift into the 70s or 80s. Intense heat waves and a historic drought in the American West reflect climate change that is making weather more extreme.

The June heat in Oregon, Washington and British Columbia killed hundreds of people and served as a wake-up call for what's ahead in a warming world. It was virtually impossible without human-caused climate change, a detailed scientific analysis found.

Even younger residents struggled with the heat in June and dreaded this week's sweltering temperatures.

Katherine Morgan, 27, has no air conditioning in her third-floor apartment and can't afford a window unit on the money she makes working at a bookstore and as a hostess at a brewery.

She'll have to walk to work Thursday, the day when temperatures could again soar.

"All my friends and I knew that climate change was real, but it's getting really scary because it was gradually getting hot — and it suddenly got really hot, really fast," Morgan said.