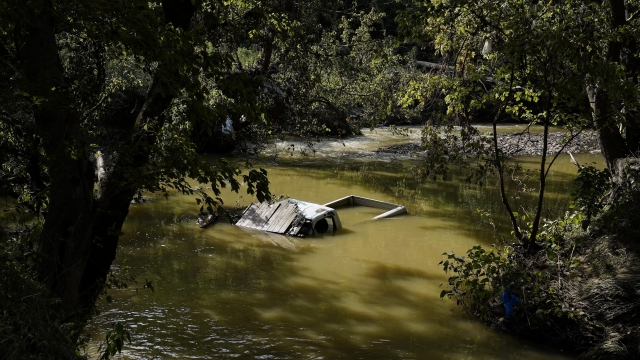 The monsoon rains that flooded large parts of the southwest are slowly heading east into the drought stricken southern plains.

From severe droughts to flooding, the southwest is getting hammered by a new round of extreme monsoon storms.

"The rushing waters were so loud, you couldn't hear anything else," said Juan Piñeda, a Benson, Arizona resident.

Parts of the southwest still recovering from extreme storms in the last few days are once again filling sandbags and bracing for another round.

"It's likely going to be one of the bigger events this season," said Rob Howlett, who works at the National Weather Service in Tuscon.

The National Weather Service issued a flash flood watch for most of Arizona, New Mexico and El Paso, Texas, that is affecting nearly 10 million people.

That will last through Saturday night with 1-2 inches of rain per hour possible.

"The main concern is going to be flash flooding, which, with the heavy rainfall, and falling in a short period of time, that's going to run off into our streams and washes and also in our streets in the cities," said Howlett.

The National Weather Service says it's the remnant of a tropical system that moved across Northern Mexico, which makes it complex to forecast.

"There's always going to be that uncertainty and potential for more rainfall and there's potential for less rainfall, there can be a better case scenario," said Howlett.

First responders are asking people to be smart and stay out of flood waters.

"It may look like the wash is standing water but it's actually running underneath and we don't want you driving in those washes," said Dave Folio, a firefighter with the Scottsdale Fire Department.

The excessive moisture caused a mine in Tombstone, Arizona to cave in this week.

In Southern Utah, monsoon rains are putting increased pressure on this dam without the ability to store the excess moisture.  Dry, clay-rich soil can be hydrophobic, which means it doesn't absorb water well and leads to instant flooding with too much rain in a short amount of time.

David Feldman is a professor of urban planning and public policy at the University of California Irvine, and director of Water UCI.

The U.S. drought monitor shows a large part of the country is still in trouble, but notes some improvement in Arizona because of heavy rains.

Now the system will move east this weekend with anywhere from three to five inches of rain from Texas to Louisiana that could lead to more flash flooding in those areas.