'Hellboy' To 'Thunder Thighs': How Dinos Get Their Nicknames 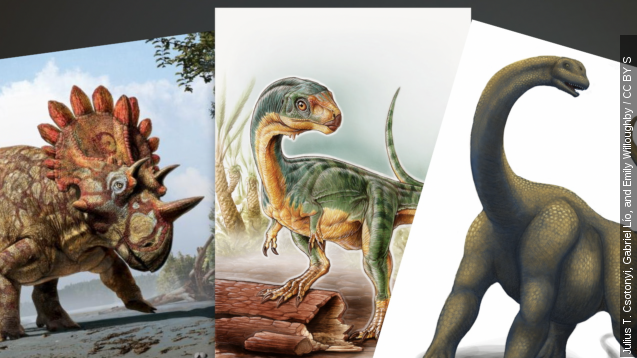 When dinosaurs make the news, they usually have some outlandish description tacked on to them, but is that a paleontological ploy to get them noticed?

It seems like it shouldn't take much to make dinosaurs cool — especially considering the latest movie loosely based on them is breaking all sorts of records right now. (Video via Universal Pictures / 'Jurassic World')

And yet when you look at dinos in the news, you get headlines describing "Hellboy" dinosaurs, "Jar Jar Binks" dinosaurs and even a "chicken from hell." (Video via BBC)

Those descriptions often have a tenuous connection with reality, as evidenced by that "Jar Jar Binks" dinosaur, Deinocheirus, which basically looked nothing like Jar Jar Binks. (Video via University of Alberta, 20th Century Fox / "Star Wars: Episode I — The Phantom Menace")

And that makes it seem like someone is trying to make dinosaurs — which, again, are already cool — even more eye-catching. But who?

While Jar Jar appears to be a press invention, other monickers — like the "chicken from hell" — come straight from the scientists themselves, who gave it that nickname as a joke.

Same goes for the "Hellboy" dinosaur, the "platypus" dinosaur, and the "thunder thighs" dinosaur, who actually got the nickname worked into its scientific name.

Seeing how easily these nicknames translate into headlines, the notion that giving your dinosaur an outlandish descriptor could help get it noticed doesn't seem like a stretch — given how hundreds of new dinosaurs are discovered every year.

But little nicknames don't compare to some of the sensationalizing that went on during paleontology's early modern history.

The race to collect and discover new fossils in the U.S. during the 19th century was such that science took a back seat to self-aggrandizing, with high-profile figures — like Edward Cope and Othniel Marsh — resorting to theft and bribery to try to outdo one another.

In that context, a couple outlandish nicknames don't seem so bad, especially when one objective of paleontologists, and scientists in general, is to draw more people to the sciences. (Video via The Salt Lake Tribune)

As paleontologist Steve Brusatte explains, "Jurassic Park" — the original one — kind of played that role, too. "It inspired a huge number of people to study dinosaurs," and it "led many museums and universities to hire dinosaur experts, and catalysed [sic] a burst of funding for palaeontological research." (Video via Universal Pictures / "Jurassic Park")

So even if the "chicken from hell" doesn't look that much like a chicken, if the name gets people looking, that might be enough.