Here's How The Russian Media Is Covering Ukraine 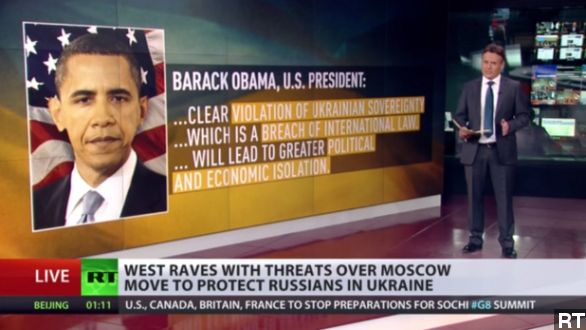 From the American media's perspective, the crisis in Ukraine was provoked by Russian President Vladimir Putin after the Ukrainian people's overthrow of a pretty corrupt politician. (Via CNN, ABC, NBC, CBS)

But if you paid attention to the news coverage in Russia, you'd likely walk away with a very different impression. (Via Russia 24)

That is, what's happening in Ukraine is the work of a Western-backed, extremist coup — at least according to Kremlin-funded network RT.

"Washington insists the illegal government in Kiev is legitimate."

"Another example of hypocrisy flying high in the country that touts itself as the world's leading democracy."

"And further stoking tensions around Ukraine — the Western media." (Via RT)

Russian media have spent a lot of time accusing the U.S. of hypocrisy, given the war in Iraq. (Via Voice of Russia)

Thev've also downplayed Russian military involvement in Crimea while playing up reports of neo-Nazis, extremists, and fascists involved in the protests. (Via RT, Voice of Russia, Pravda)

This isn't to say the Western media doesn't have its own bias. But part of what's feeding the problem — on both sides — is misinformation.

But some sharp-eyed journalists and bloggers noticed those guns are a type used exclusively by Russian forces. (Via Live Journal / Raymond Saint)

Then there was this story from state-run Channel One TV. It reported more than 100,000 refugees had fled Ukraine for Russia. But as several media outlets later pointed out, the pictures accompanying the article were taken at a border crossing between Ukraine and Poland — not Russia.

To be fair to RT, there has been one big exception to what critics would describe as very pro-Russian coverage.

Live on the air, one of its anchors recently spoke out against the presence of Russian troops in Crimea. (Via BBC)

Which prompted a statement from the network saying its journalists were free to express their own opinions, adding RT "dares to show the side of events that does not fit the mainstream narrative, regardless of the realities on the ground." (Via National Journal)

The New Republic's Julia Ioffe noted Sunday the network appeared to overlook at least one such reality on the ground — providing zero coverage of anti-war protests in Moscow, despite hundreds of arrests and allegations of police brutality. (Via YouTube / novayagazeta)