Here's Why North Korea Is Cozying Up To Russia 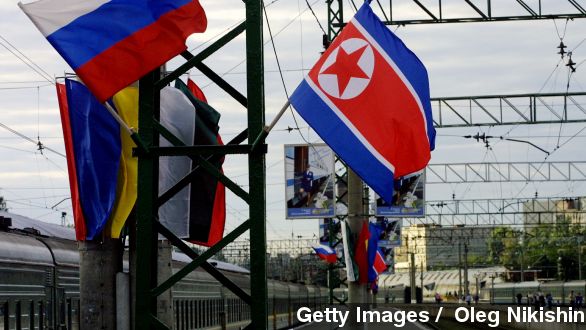 North Korea dispatched a senior government official to Russia, a sign it wants to improve relations with its neighbor.

Both are international outcasts, and both want to do business together.

ARIRANG: "The envoy to North Korean leader Kim Jong-un held an hourlong meeting with Russian President Vladimir Putin in Moscow on Tuesday. The Kremlin said he delivered a message from the young Kim."

We don't know the contents of that message, but it might have included a trip down memory lane ... to the days when the Soviet Union was North Korea's primary financial backer, accounting for a majority of its trade. (Video via YouTube / meleszenawi1111)

After the collapse of communism, China emerged as Pyongyang's main sponsor.

But ties with China have been a little frosty since Kim Jong-un had his Beijing-friendly uncle executed and went ahead with another nuclear test last year.

Now, with its economic lifeline in doubt, North Korea is courting Russia. And Russia has legitimate interests in North Korea, too.

Now isolated after international sanctions imposed over the crisis in Ukraine, Moscow is apparently trying to increase its influence in the Asia-Pacific region — starting with the Korean peninsula.

Or as one North Korea expert wrote on the influential 38 North blog, "The very fact that Moscow and Pyongyang are subject to US sanctions will objectively draw them together."

For years now, Putin has been increasing cooperation with Pyongyang — with plans to boost annual trade with North Korea to $1 billion by 2020. (Video via NTDTV)

And the year before that, Moscow wrote off nearly all of North Korea's $11 billion in debt left over from the Soviet Era.

North Korea has another reason to cozy up to Russia. The U.N. Security Council could soon vote on whether to refer Pyongyang to the International Criminal Court for human rights abuses. Pyongyang's counting on Russia and China to veto that measure.