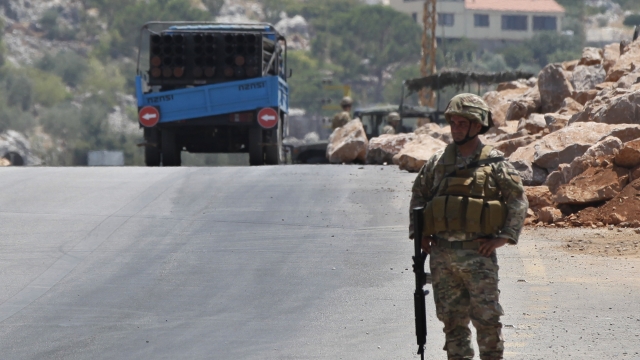 The group said it fired 10 rockets, calling it retaliation for Israeli airstrikes the day before.

Hezbollah said it fired a barrage of rockets near Israeli positions close to the Lebanese border on Friday, calling it retaliation for Israeli airstrikes on southern Lebanon a day earlier.

Israel said it was firing back after 19 rockets were launched from Lebanon, and Prime Minister Naftali Bennett swiftly convened a meeting with the country's top defense officials.

“We do not wish to escalate to a full war, yet of course we are very prepared for that,” said Lt. Col. Amnon Shefler, spokesman for the Israel Defense Forces.

It was the second straight day of rocket fire from Lebanon. But where Hezbollah took responsibility for Friday's shelling, it was unclear who was responsible for the attacks early Thursday, Shefler said.

Friday's exchanges were a significant escalation between Israel's new government and Iran-backed Hezbollah, and comes amid rising tensions between Israel and Iran that has played out in the Persian Gulf.

Israel’s defense minister warned Thursday that his country is prepared to strike Iran, issuing the threat against the Islamic Republic after a fatal drone strike on a oil tanker at sea that his country blamed on Tehran.

The U.N. peacekeeping force deployed along the Lebanese-Israeli border said it has detected rocket launches from Lebanon on Friday, and return artillery fire by Israel.

Sirens blared across the Golan Heights and Upper Galilee near the Lebanon border Friday morning. Hezbollah said in a statement that it hit “open fields” near Israeli positions in the disputed Shebaa farms area, with “dozens” of rockets. No casualties were reported.

The group said it fired 10 rockets, calling it retaliation for Israeli airstrikes the day before. Those strikes were in retaliation to rocket fire from south Lebanon, which was not claimed by any group.

The escalation comes at a sensitive time in Lebanon, which is mired in multiple crises including a devastating economic and financial meltdown and political deadlock that has left the country without a functional government for a full year.