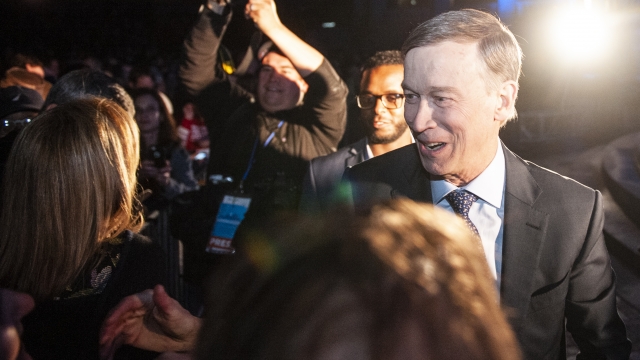 In defense of loosened marijuana laws, presidential candidate John Hickenlooper said marijuana use didn't spike after it was legalized in Colorado.

Acceptance of marijuana has been growing across the country, but it's still completely illegal at the federal level. Politicians vying for the White House in 2020, like Democrat John Hickenlooper, are weighing in on the issue.

In 2012, Colorado became the first state to legalize pot for recreational use, and sales began two years later. Hickenlooper's office told our partners at Politifact he meant to say pot use didn't spike among *young people. But let's look at it both ways.

The best source of data for marijuana use is the National Survey on Drug and Health Use. For 2013-2014, it estimates just over 15% of adults reported using marijuana in the previous month. For 2016-2017, that number was just over 17%. Data from the state of Colorado tells a similar story. An annual state survey found in 2014, 13.4% of adults reported using pot within the past 30 days. In 2017, that number was 15.5%. So both sets of data show about a 2% increase, and that doesn't seem big enough to qualify as a "spike."

But what about the young people during that same time? The national survey estimates the percentage of kids age 12-17 who reported using pot in the past 30 days fell from over 12% to 9%.

State data shows that in 2013, 19.7% of students said they'd used pot in the previous month. In 2017 that number was 19.4%. So for young people, marijuana use certainly didn't "spike" after legalization, and in fact it went down.

But there's one big thing to remember when looking at those numbers: The best usage statistics available come from surveys, and a survey's accuracy depends on the honesty of the people responding to it.

The data shows more people reported using pot after it was legalized in Colorado, but as Hickenlooper said, it didn't really "spike." And at least part of that increase might be due to people being more honest about their marijuana use after it became legal.