15 Journalists Killed In Mexico, On Track For Deadliest Year For Press 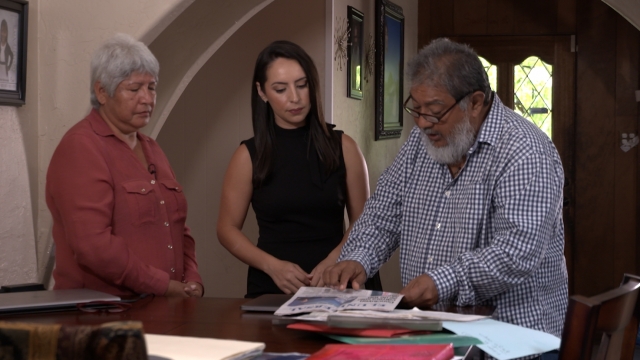 Journalists in Mexico are now fleeing after threats of being killed by the cartel and a lack of protection by the police.

Migrants are facing a brutal road as they travel through Mexico to reach America. There is ongoing corruption, desperation and child exploitation at the southern border.

These are the stories that drove Maria de Jesus Peters and her husband Juan de Dios Garcia Davish throughout Chiapas, Mexico — to locations few journalists dare to go.

"I would write Mexico is the nightmare of the American dream," said Peters.

It's a journalistic calling that put their lives in danger. Video captured Peters covered in blood after being struck while covering a caravan of people heading for the United States.

Davish recalls a brutal attack by police in 2012 while on assignment.

2016 marked their first death threat, coming from a man claiming to be a commander with the Zetas, one of the most dangerous drug cartels in Mexico.

They were scared. So was their young daughter.

This may be another threat, but this one felt different. Suddenly the two storytellers became the story.

The family was forced to flee on a tourist visa and arrived in Phoenix at the end of June.

The exact number of journalists killed in Mexico this year is disputed.

As many as 15 murders are reported by The Associated Press.

Jan-Albert Hootsen is on the Committee to Protect Journalists as a Mexico representative.

"Bluntly put, this is probably going to be either the deadliest or one of the deadliest years in Mexican recent history for journalists," said Hootsen. "Impunity levels are sky high. You know, Maria de Jesus and Juan de Dios, they have been reporting threats against their life for six years now. Not a single person has been properly investigated," said Hootsen.

He believes the threats are coming from multiple fronts, including corrupt politicians, police, the army and organized crime groups.

"Sometimes they can be just verbal threats. They can be abductions. It can be torture," said Hootsen.

It's a fate this family fears as time and money run out. Unable to find protection and legal help in Phoenix to extend their tourist visa, the family boarded a bus to LA where they hope someone will take their case.

NEWSY'S ADI GUAJARDO: What is your biggest fear? What do you think is going to happen if you are not able to find any help here in the United States?

MARIA DE JESUS PETERS: Yes, I feel safe here. But if the doors close I'll have to return, and who knows if I'll survive it?

The award-winning journalists say going back to Mexico would mark the end of their career in journalism; a passion that's given their life purpose, and now threatens to end it.