Higher Demand For Air Conditioning Could Further Affect The Climate 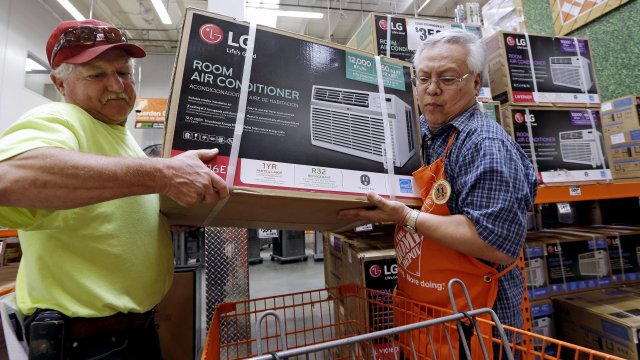 Increasing demand for air conditioning is outpacing supply. This rise in AC use will also affect the climate, which could lead to more heatwaves.

The increased demand for air conditioning in the U.S. has been underscored by record-breaking heatwaves, impacting tens of millions of Americans coast to coast.

Experts argue that added air conditioning and energy capacity is necessary for health reasons, as extreme heat is responsible for more weather-related deaths in the U.S. than any other kind of hazard. At the same time, there are concerns that this energy usage could make the effects of climate change worse.

"Climate change has caused it to get warmer, and as humans, the best adaptation policy or action that we can take is to use air conditioning," said Renee Orbringer, assistant professor at Pennsylvania State University's School of Energy and Mineral Mining. "That in turn, depending on where you get your energy — which in the US is largely fossil fuels — leads to furthering climate change. What we're seeing is that it's happening a lot faster than a lot of the utilities were prepared for."

In fact, residents in regions that had historically less need for cooling devices are seeing spikes in aircon adoption. In Seattle, where only 44% of households have an window unit or central AC, demand has been so high that installation companies in the area were already booked out for the summer in April.

It won’t take much of a temperature increase to drive demand, either. A study by Orbringer found that household demand for air conditioning is expected to increase by 13% if the world warms up by two degrees Celsius, or about 3.6 degrees Farhenheit. If global temperatures increased by half a degree Celsius, it could triple the demand for air conditioning in Indiana and Ohio, which could put a strain on energy grids unprepared for the increases.

"Worst case scenario: Our demand increases, our supply stays the same," Orbringer said. "We're going to have potentially two weeks' worth of deficit where we don't meet our demand, and ultimately, the way that electricity grids work is they don't want to shut down the whole grid, because it takes so much to get it back up and running. So, they'll shut down portions of the grid to keep everything sort of going."

Fixing the problem is going to require finding ways to make our air conditioning more efficient, which may mean retrofitting entire old buildings.

But how much energy you need to cool your house depends on the climate you live in, so air conditioning specs for one part of the country may not match another area.

"What leads households in Arizona to increase their air conditioning use is not going to be the same as in Florida, because this humidity factor is absolutely critical for determining sort of how we experience temperature as humans," Orbringer said.