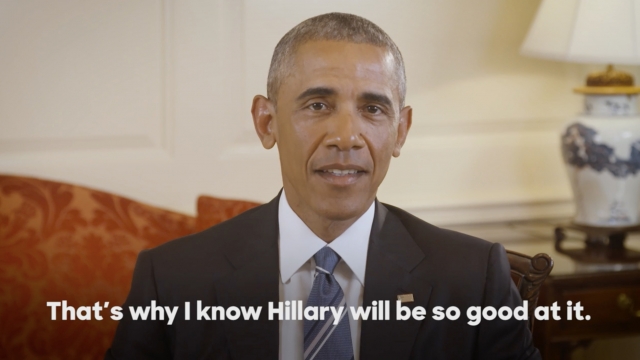 Just a few hours after the president met with Bernie Sanders at the White House, Hillary Clinton's campaign released a video with Obama's endorsement.

It's the endorsement Democrats have been waiting for.

"Look, I know how hard this job can be. That's why I know Hillary will be so good at it. In fact, I don't think there's ever been someone so qualified to hold this office," President Barack Obama said in his endorsement video.

President Obama has officially endorsed Hillary Clinton for president, just two days after she declared victory in the Democratic race for the nomination.

The endorsement came just a few hours after Obama met with Sen. Bernie Sanders. After that meeting, Sanders' usual talk about continuing to the convention switched to talk of combining forces with the Clinton campaign.

"I look forward to meeting with her in the near future to see how we can work together to defeat Donald Trump and to create a government which represents all of us, not just the 1 percent," Sanders said.

In that statement, Sanders pledged to stay in the race through the Washington, D.C., primary, which is June 14.

This video includes a clip from Hillary for America and images from Getty Images. Music provided courtesy of APM Music.