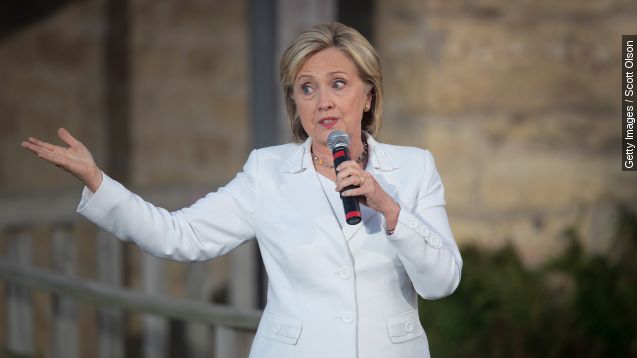 Hillary Clinton supported the Trans-Pacific Partnership when she was in the State Department, but rejected the finished deal Wednesday.

The completion of the massive 12-nation trade deal known as the Trans-Pacific Partnership has left Democratic front-runner Hillary Clinton between a rock and a hard place. On Wednesday, she chose the hard place. (Video via U.S. Trade Representative)

"As of today, I am not in favor of what I have learned about it. … I don’t believe it’s going to meet the high bar I have set," she told PBS.

Clinton’s rejection of the trade deal aligns her with other prominent Democrats who’ve criticized the deal. It will also earn her political points with the powerful labor unions who are still deciding which candidate to back in the Democratic presidential primary. (Video via AFL-CIO)

But in rejecting the TPP, Clinton places herself firmly in opposition to President Obama’s strategic shift toward Asia — which is something then-Secretary of State Hillary Clinton helped develop. (Videos via the White House and C-SPAN)

"She negotiated this agreement for President Obama, called it the gold standard. That was then, this is now," a Fox News anchor said.

Criticizing a deal she once praised is bound to leave Clinton open to criticism of flip-flopping, and Democrats might wonder whether her latest stance is born out of conviction or calculation. (Video via Hillary for America)

In a statement, Clinton said: "I still believe in the goal of a strong and fair trade agreement in the Pacific. ... But the bar here is very high and, based on what I have seen, I don’t believe this agreement has met it."

Clinton's new stance does have one plus: She won’t have to defend the TPP during the first Democratic primary debate Oct. 13.