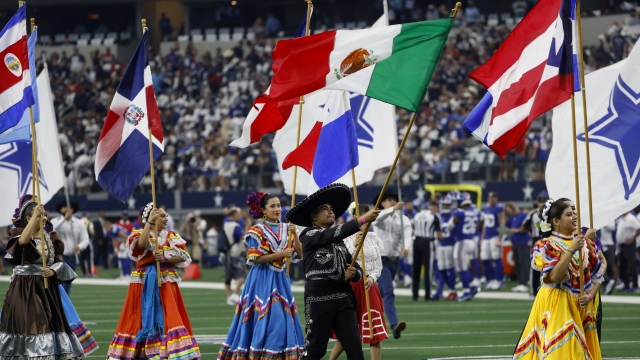 A specific city in Oregon has seen a huge amount of growth in the Hispanic community.

It's almost 7 o'clock at night and Rosa Ramirez has had a fruitful day. Today her sales were good, but Ramirez says it isn't always this way.

She sells pupusas that she makes at a market in Hillsboro, Oregon. It's a traditional dish from her home country of El Salvador.

Ramirez says she was pregnant when she almost died at a shooting during the civil war in her country.

Her unborn child did not survive. Heartbroken, she left El Salvador in 1992. Oregon has been her home for the last 30 years.

"When I came here there was almost no one who spoke Spanish. Only English, and it was difficult for me because I was a nanny, and I was working for people who only spoke English and then I started fighting with the language," said Ramirez.

According to the 2020 Census, Oregon's Latino population grew by more than 30% in the last ten years.

Latinos are now the largest minority group in the state and their numbers have grown faster than the national rate in each of the last three decades.

Maria Caballero Rubio is the executive director of Centro Cultural in Washington County.

"That just shows that we are making a mark and we are growing. And I think people are acknowledging that we are a growing population," said Rubio.

She has seen steady growth since her farmworker family settled in Washington County in 1969. They migrated from Durango, Mexico.

The sisters combine Mexican flavors and American ways of cooking.

"Maybe eight years ago, the only flags we had up here were the Mexican flag, because a lot of people were from, [or] have their ethnicity from Mexico. And then we had the American flag. But then the more that we started having visitors, they would say to me, you know, 'where's my flag?' so, we decided that we would bring in the flag for people who've come to visit," said Rubio.

Caballero says that the thriving Latino population is starting to rise out of the fields and into professional jobs.

"We had jobs in farm work or we had farms, jobs in in landscaping and those kinds of things. But more and more, as our communities have stayed here and the next generations have grown up and they become educated, they are coming back as professionals," she continued.

More than half of Oregon's Latino population is in three counties: Multnomah, Washington and Marion. There the Latino communities grew by at least 25% in the last decades.

"We are becoming more visible now, I have to say. Ten years ago, you couldn't find an elected official here in Washington County or the Portland metro area that was Latino," said Rubio.

Maria says the younger population may cause a shift in politics as more become eligible to vote when they turn 18.

NEWSY'S AXEL TURCIOS: There's more representation in the Latino community, in the state legislature, city councils, more Latinos getting into office, representing these growing communities across the state. Will this last?

MARIA CABALLERO RUBIO: I think so. I think it will last. We're going to move forward and we're going to continue making change, you know, social and systems changes that need to happen because of the historic disenfranchisement of people of color.

"But, you know, department heads and managers and, you know, police chiefs and all of those. I think that they have not — they have not taken steps to be more inclusive in terms of recruiting and making it more more available to people of color to apply it. That's an area that we still lack," said Rubio.

The lead instructor for the group told Newsy's sister station every performance he puts on is accompanied by a history lesson.

The increase in the Latino population here in Oregon has also been propelled by new waves of migrants. One of those waves is Venezuelan migration, fleeing poverty and the government in their country. According to the American Community Survey, there are more than 1,400 Venezuelans living in the state of Oregon.

Giselle Rincon is the president and co-founder of Venezuela's Voice in Oregon.

"Mostly access to education, how to find a job, how to navigate the system, where to apply. Most of the Venezuelans are professionals and they want to help prosper the economy of Oregon."

"I think our new generations are becoming more involved. They are, you know, getting an education," said Jaime Miranda, the owner of M&M Marketplace.

Back at the Hillsboro market, Miranda says he was one of only a few Mexican immigrants in his neighborhood when he moved from Chihuahua, Mexico in 1985. He was 10 years old.

He went to college and has owned this Latino market for 22 years. He started it with only 12 vendors and now the establishment has 66.

TURCIOS: How do you think the new generations of Latinos are shifting culture here in Oregon?

JAIME MIRANDA: You know, from migrant workers to people who are starting their businesses, own their homes, they are getting a career, an education. So, we are definitely shifting to that second generation where they are integrated, and they understand how to navigate the system and be part of the community as a whole.

"Now you see more Hispanics than before. Before, you didn't see any Hispanics. Hispanics were very rare to find here in Oregon," said Ramirez.

As for Rosa, she says she carries El Salvador in her heart, but she's beyond grateful to the United States, a nation that gave her a new life and optimism about the next generation.