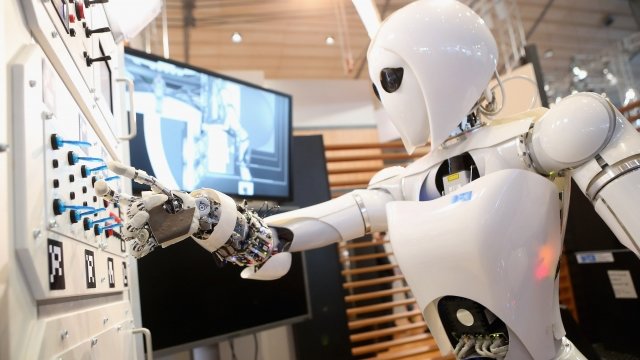 The history of artificial intelligence goes back to way before the Turing test.

Believe it or not, great minds have been thinking about artificial intelligence long before Hanna-Barbera brought us Rosie, the Jetsons' domestic wonder-bot.

For tens of thousands of years, humans and our ancestors have been trying to figure out how to make the world work for us. Twigs for fire. Wheels for transportation. We get there; some discoveries just take longer than others.

Modern innovations have come in fits and starts. There are four big leaps, to be exact.

UBS lays them out. In 1784, the first industrial revolution with mechanical production, leading to steam-based energy powering hulking machines like trains.

Voice-Sensitive Tech Dominated CES â Even With Its Security Drawbacks

Skip ahead almost 100 years to 1870: the second revolution with mass production in factories and harnessing electrical energy, lighting homes and businesses. During WWII, engineer Alan Turing created a powerful German-code-breaking computer and developed the "Turing test" in 1950.

Wired describes the test as "a benchmark to determine a machine's ability to 'think' like a human. Though his ideas were ridiculed at the time, they set the wheels in motion, and the term 'artificial intelligence' entered popular awareness in the mid-1950s."

What began in Turing’s lab became part of the third revolution in 1969: computing power. Computers have since become interwoven into just about every part of our daily lives. Dishwashers. DVRs. Cash registers. Cellphones.

We are now living in the middle of the fourth revolution: A.I.

Check out this rapid-fire timeline published by Oxford and Yale professors looking at when experts in the field predict A.I. will outperform humans in certain tasks:

Economists foresee upheavals ahead as industries reorient themselves to the age of A.I. Some developments will be painful, inevitably introducing automation and job loss, but possibly creating new fields as a byproduct.

Other developments will make life easier — like having Rosie to flip the pancakes and a smart car to get Judy and Elroy to school on time.

How Is Automation Transforming The Economy?

Robots are already changing the way we commute, deliver goods, care for patients, and even what we do in the bedroom.