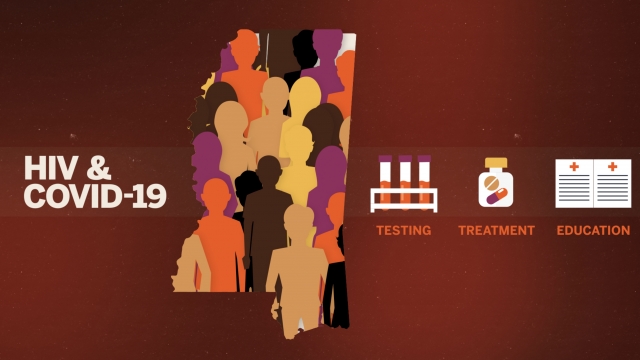 It's June, and a month once known for Pride parades is now seeing protests nationwide.

With LGBTQ+ rights at the forefront, in the middle of social unrest and a global pandemic, one very important doctor decided to make a house call: Dr. Anthony Fauci.

In a conversation with Newsy's Cody LaGrow, Dr. Fauci called HIV "simple" compared to the range of symptoms with COVID-19, addressed the stigmas associated with disease and assured that yes, the gays will be able to brunch again one day — adding he'd like to join.

You could call Dr. Fauci an ally. In the 80s, he fought for wider access to HIV treatments that saved countless lives.

In the 2000s, he was a part of PEPFAR — a program to reduce transmission of HIV/AIDS in poorer countries.

That epidemic has something in common with COVID-19 today: a deeper impact on poorer communities of color.

Look at the HIV/AIDS epidemic, a thing that is still very much happening in the United States.

In 2018, the CDC said black people accounted for 13% of the population and 42% of new HIV diagnoses in the US.

COVID-19 is no different. In places like Chicago, black people are 30% of the population but 60% of its COVID-19 deaths.

Pandemics expose yet another way the United States fails people of color.

"Because of the social determinants of health and the positions [Black Americans] find themselves in economically and regarding employment, they in fact have a higher risk of getting infected," explained Fauci.

My Brother's Keeper is a clinic that caters to Mississippi's LGBTQ+ community in a state with the highest concentration of Black people.

Mississippi is in the middle of HIV and COVID-19 epidemics, and Abdul-Haqq can't help but see the parallels.

Treating HIV and COVID-19 share similar complications for people of color, including access to testing, treatment and education. Still, My Brother's Keeper never shut its doors to the people it serves — typically low-income and/or queer people of color.

Mississippi is still seeing cases climb, hospitals are concerned about capacity and yet, it's reopened and back to business. A move that makes Abdul-Haqq skeptical.

"There are a lot of people who believe that the reason that our federal and legislative leaders wanted to reopen is because they noticed, oh, this is impacting Black people. So it's OK for black folks to suffer," deduced Abdul-Haqq.

So why do the perceptions of infectious diseases linger for some and not others? Stigmas surrounding HIV still exist. But, with COVID-19, they pack less of a punch. Dr. Fauci explained the blame game.

"Whenever you have a disease that's new that tends to selectively or predominantly affect a certain demographic group, that group often gets blamed as the source of the particular illness in question, the particular infection," said Fauci, who said he would never call coronavirus the "Chinese virus."

"Back in the early years of HIV, it was not good at all. Racial and ethnic groups get stigmatized because of that. The reason I don't think you're seeing that so much with COVID-19 is that this is an infection that spares no one," described Fauci.

While the nation looks to Fauci for advice on the latest virus, he reminds us that getting politics involved in public health can bring good, but it takes time.

"Right now, we have a situation where we're trying to end HIV in the United States. And in fact, this administration has put together a program to end it in 10 years. Hopefully, we'll be able to do it," said Fauci, whose served six presidential administrations.

So as places like New York City bury unclaimed bodies from COVID-19 in mass graves at higher rates on Hart Island — a familiar site for unclaimed HIV/AIDS victims, Abdul-Haqq said we can start saving our brothers and sisters through societal change.

While Airlines Set Own Pandemic Rules, Flights Are Increasingly Packed

New data shows that, without limits on how packed planes can be during the pandemic, flights have gotten more than five times as full since April.