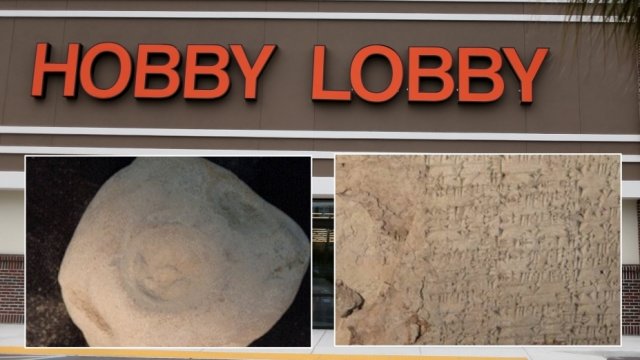 The retailer maintains that it didn't buy artifacts from "anyone who indicated that they acquired items from" Iraq.

Arts and crafts chain Hobby Lobby has reached a settlement with the U.S. Department of Justice for smuggling thousands of Iraqi artifacts into the country.

The company has agreed to pay $3 million and forfeit the artifacts.

According to a statement from the company, Hobby Lobby began collecting "historically and religiously important books and artifacts about the Bible" in 2009.

It's worth noting that Steve Green, the president of Hobby Lobby and son of its founders, is the founder and chairman of the board of the Museum of the Bible in Washington, D.C. It is set to open in the fall.

The Justice Department complaint states Hobby Lobby agreed to pay $1.6 million for 5,500 artifacts in 2010. Those artifacts, which were being sold by dealers based in the United Arab Emirates and Israel, included about 450 ancient cuneiform tablets and about 3,000 ancient clay bullae, which had seals imprinted on them.

An expert retained by Hobby Lobby's attorney warned the purchase of any artifacts "likely from Iraq" carried "considerable risk."

In a major victory in the fight against ISIS, Iraqi forces recaptured the remains of Mosul's Great Mosque of al-Nuri.

That's because archaeological sites in Iraq have been a prime target for looting. Since 1990, the U.S. has banned the import and transfer of ownership of Iraqi cultural property illegally taken from the country.

The expert's memo to the attorney stated: "Particularly popular on the market and likely to have been looted are cylinder seals, cuneiform tablets."

According to the complaint, Hobby Lobby's attorney didn't share that information with "anyone involved in the purchase and importation."

U.S. Customs and Border Protection detained some of the packages. According to the complaint, the packages "falsely stated" their contents and values.

For example, the shipping label for some of the cuneiform tablets said "hand made [sic] miniature clay tiles."

In a statement, Green said: "We should have exercised more oversight and carefully questioned how the acquisitions were handled."

The company maintains that it didn't buy artifacts from "anyone who indicated that they acquired items from" Iraq.