Why Aren’t COVID Vaccines Getting To More People? 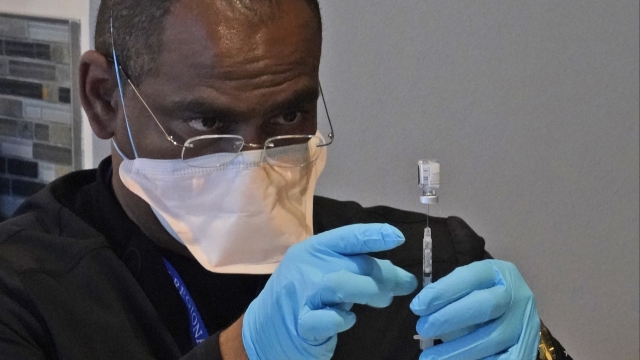 Only 5 million of 20-million target got doses of vaccination by end of December.

In the early weeks of Covid-19 vaccine rollout, vaccines are getting to the states but not into the arms of people. The federal government has promised 20 million people would be vaccinated by the end of December, but just over 5 million people have received their first-dose vaccinations. In some states, hospitals are opening up times for vaccinations. Getting an appointment is another challenge.

“It is the hunger games. You have all these elderly people and you say here’s a website, here’s a phone number, good luck, may you ever be lucky, have at it,” Cory Morrocco said in Florida. She's waiting to get a vaccine.

“In the first half hour we received over 10,000 calls,” said Robert Lord, president of Cleveland Clinic Martin Health.

Others have been at the right place in the right time when broken freezers or missed appointments had vaccinators not wanting to waste doses.

"I was walking through a grocery store on New Year's Day and the pharmacist had extra doses that would have gone to waste. So she asked my friend if we wanted them. We went through all the paperwork, got our injections and got signed up for the second dose at the end of this month," David MacMillan of Washington DC, told Newsy. He got Moderna COVID-19 Vaccine.

Operation Warp Speed officials are blaming the Christmas and New Year holiday season for the low number of people actually getting shots. HHS head Alex Azar also said too much focus has been on who gets vaccinated first.

"Those are simply recommendations and they should never stand in the way of getting shots in arms instead of keeping vaccine in the freezer," he said.

Azar also said that there’s a time and data lag from places giving the vaccines not reporting them to the CDC.

“Forty percent of the pharmacies are not yet reporting into the system,” Azar said.

But much of the planning has been left to the states and local governments, who relied on hospitals to handle logistics, strapped already by COVID patient surges.

"We distributed vaccine to hospitals and the hospitals said first come, first served and just show up and we'll do it,  So, they didn't use a registration system. There wasn't anything that was done," Florida Governor Ron DeSantis said.

Some health departments are still working on their plans for priority groups of seniors. For example, in Boulder County Colorado, a plan will come late next week.

“We hope we can work out a situation with some pharmacies locally and have them be able to provide it to this older adult population but we’re still working on that and we would ask residents please don’t call your pharmacy because they don’t have the information either," Chana Goussetis, Boulder County Public Health Spokesperson said.

"As soon as that vaccine comes in we're getting it to people," Dr. David Basel of Avera Health in South Dakota said.

South Dakota leads the nation, using 62% of its doses so far. They’re using electronic medical records systems to contact eligible people via email or text. Pace wise, Operation Warp Speed officials hope to get at least 20 million of Pfizer and 20 million of Moderna out by the end of January. By March, they expect 200 million doses of both will be available.