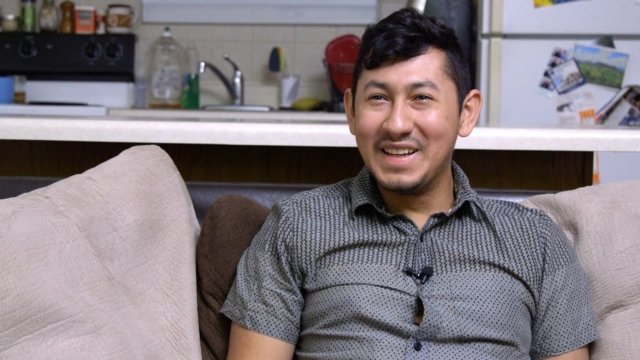 Since 1999, Luis Gonzales and his parents have lived in the U.S. without fear of deportation — but that immigration program could soon end.

Luis Gonzales was illegally brought from Honduras to the U.S. when he was 6 years old. But he's been protected from deportation and authorized to work in the U.S. for almost 20 years thanks to an immigration program called Temporary Protected Status, or TPS.

"I've lived here for 22 years. How can you tell me that I have to go back?" asked the 28-year-old. "And how can you tell Haitians that have worked really hard to go back? And what gives you the right to say, 'Well now you're good to go?' I just made my whole life here. My Spanish is broken as f---. People would be like, 'What are you doing here, bro?'"

Gonzales continued: "The U.S. government is like, 'Well, these people now have skills that they'll be able to bring back.' Yeah, I have skills, but I don't know if those skills would translate to my survival in Honduras."

The country's citizens were allowed to legally remain in the U.S. after a devastating earthquake rocked Nepal three years ago.

Gonzales is among nearly 320,000 immigrants from 10 countries who have received time-limited permissions to work and live in the U.S. because of natural disasters or other events that make it dangerous for them to return home. But the Department of Homeland Security revisits the TPS designation for each country every six or 18 months, and it has recently ended the designation for El Salvador, Haiti, Nepal, Nicaragua and Sudan, concluding that the the conditions in these countries have improved over the years and that their citizens can now safely return home.

The administration gave hundreds of thousands of TPS recipients from those countries more than a year to leave or attempt to change their immigration statuses. As for the fate of nearly 60,000 Honduran recipients, including Gonzales, federal officials are expected to make a decision in the next few days.

"First of all, I don't want to go anywhere else. Like, it's not just Honduras. I don't want to move to, name a city or state. I don't want to move there because I have a life here," explained Gonzales. "Immigration's going to have to physically come get me and put me in a car and send my a-- back, because there's no way that I will say, like, 'I volunteer as tribute.' It's just not logical in my head for that to happen. And I don't know if it's logical for other people that are so ingrained in our society," he added.

The DHS has extended the TPS designation for Honduras and Nicaragua more than 10 times. The countries were added to to the program in 1999 after Hurricane Mitch killed thousands and caused massive infrastructure damage. It was considered Central America's disaster of the century.

"My family and I were always really grateful that we had this form of protection," said Gonzales. "In the back of your mind it's like, 'Oh, it's always been renewed. It's going to be renewed again.' Until now, where it's like, 'Well, maybe …,'" he added.

Explaining how she reached her decision last week to end the designation for Nepal, DHS Secretary Kirstjen Nielsen wrote: "Since the 2015 earthquake, conditions in Nepal have notably improved … and Nepal can now adequately manage the return of its nationals."

The Federation for American Immigration Reform, a group that lobbies for immigration restrictions, called the DHS decision to cancel TPS for Haitians "long overdue," adding that it honored "the temporary nature of the protection."

But immigration rights activists argue that many immersed immigrants who have lived and worked in the U.S. for decades and established families should have a direct path to permanent residency. The American Immigration Council estimates that around 273,000 U.S.-citizen children have parents with TPS, just like Gonzales' younger brother and sister.

"DACA recipients and TPS grantees are the most vulnerable because the government has their information," said Fred Tsao, senior policy counsel at the Illinois Coalition for Immigrant and Refugee Rights. "What can be granted on a temporary basis can be taken away, and that's the harsh reality that we're facing."

Tsao said: "Congress has also passed specific legislation to benefit people fleeing from other countries, allowing them upfront access to lawful permanent status. You have the Cuban Adjustment Act, for instance. And there's been, in decades previous, legislation to benefit students who fled the Tiananmen massacre in China, or going back 60 years ago, people who fled Hungary. Compared to that, TPS was always kind of a half-measure. If there were more political will, you know, there would have been specific legislation for Salvadorans and Hondurans or Nicaraguans or Haitians that have benefited from TPS for so many years."

He added: "TPS populations have generally been relatively small, and this population tends to be concentrated in certain areas. Legislators in those areas are going to be particularly concerned about these populations, but that's not necessarily going to translate into support elsewhere. That's part of the problem."

A Republican U.S. congressman from Florida has introduced a bill that would allow most TPS recipients to obtain a path to permanent residency. Even if nothing comes out of the bill, it does put the spotlight on the plight of TPS recipients — something Gonzales says is urgently needed.

"People, I think, are becoming numb a little bit about things that are not right now an emergency. We only react to emergency," noted Gonzales. "Like, 'DACA is being rescinded. Let's all march. Let's get there.' And then the administration has been smart about how to go about TPS and how to not make it an emergency. We're giving people a year to transition out of the United States. That doesn't sound like it's an emergency. But it really is an emergency, right?" he asked.

Gonzales continued: "Hearing about these policies that are a pathway to citizenship, residency, like, I think that's something we can fight for. I mean, there are people that have been living here for two decades, right? They own homes. They have children here. They've gone to school. They've graduated. They contribute to the society, and they deserve to not live in fear that one day it's all going to be gone."