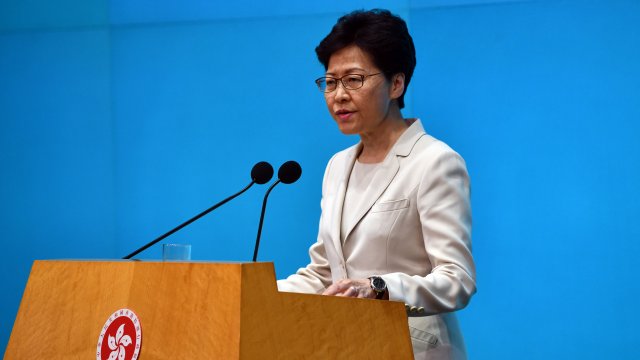 Hong Kong's leader announces plans to give more people access to affordable housing, amid the ongoing protests in the city.

Hong Kong Chief Executive Carrie Lam is using a different approach to try and defuse the tension in her city.

Lam is promising to increase housing in Hong Kong and create more affordable homes. In a Facebook post, she wrote, "Housing is the first priority of the people's livelihood."

Protesters have been demonstrating for months, and have set out five demands. None of those demands refer to housing, although Lam's proposal seems to address a long-time concern for the lower and middle class.

The city is known for high rents and soaring home prices. Research from Deutsche Bank shows the average monthly rent for a 2-bedroom flat is $3,685. Hong Kong also faces an enormous wealth gap. Nonprofit group Oxfam said the gap is the largest in more than 45 years. It recommended Hong Kong set aside billions of dollars to prevent more people from falling into poverty.

As months of protests hit the region's economy, Hong Kong revealed a $2.4 stimulus package to avoid a recession.

This isn't the first time the government has tried to prop up the city with economic initiatives. In August, it unveiled a $2.4 billion stimulus plan to boost a sluggish economy. That included tax breaks, subsidies and job opportunities for those who qualified.

Lam's announcement also comes during Hong Kong's Mid-Autumn Festival, a popular holiday in the region. While it is a typically family-oriented occasion, large crowds have gathered to protest. That's prompted the city's train system to shut down overnight services. Separately, the Women's Tennis Association said it is postponing its major annual tournament in the city due to the protests.