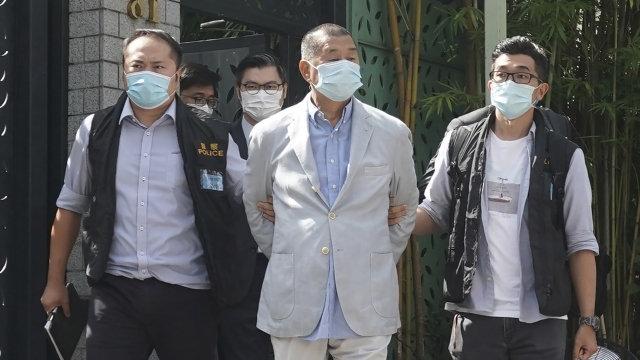 Jimmy Lai was specifically arrested on suspicion of colluding with foreign forces, according to his aide.

Lai was specifically arrested on suspicion of colluding with foreign forces, according to his aide. That offense carries a maximum penalty of life imprisonment under the national security law imposed by China.

The law went into effect in Hong Kong in late June. Critics see it as a way for China to tighten its control over the semi-autonomous region.

Lai is the founder of Apple Daily, a newspaper that's often critical of leaders in Hong Kong and mainland China. He's also been a prominent supporter of the pro-democracy protests that began last year.

Besides arresting Lai, police also raided the newspaper's headquarters Monday. Over 100 officers were seen pouring into the building, where they searched reporters' desks for hours. The police force said on Twitter it had a search warrant to enter the building.