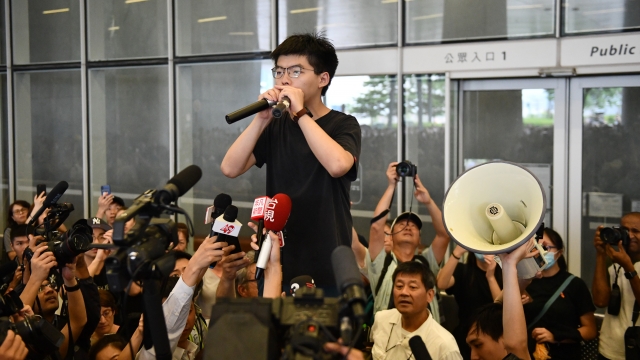 Joshua Wong, Agnes Chow and Andy Chan were all detained by police.

As part of an intensifying crackdown on the pro-democracy protests in Hong Kong, authorities have arrested several high-profile activists.

Joshua Wong and Agnes Chow were detained early Friday. They both helped lead pro-democracy demonstrations five years ago and are now part of the political group Demosistō.

Police say they arrested Wong and Chow on unlawful assembly charges. Those charges are related to a June protest that resulted in thousands of protesters surrounding police headquarters.

Both Wong and Chow were charged with inciting and taking part in the protest. Police also charged Wong with organizing the unauthorized assembly. Demosistō confirmed the two were later granted bail.

The arrests came ahead of a massive protest originally scheduled for Saturday. Earlier this week, police denied permission for demonstrators to hold the rally. And on Friday, organizers canceled the event.

Despite that cancellation, Demosistō is reportedly urging activists to still get out on Saturday and protest.