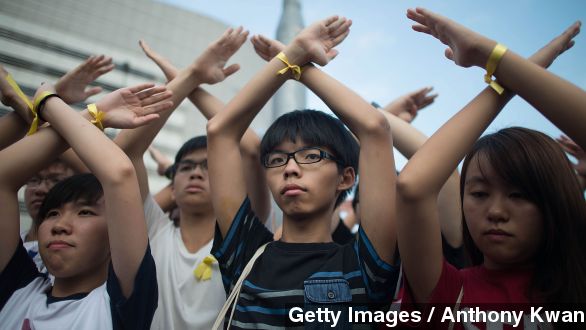 Thousands of pro-democracy protesters blanketed downtown Hong Kong Wednesday night for one final rally in what appears to be the end of the city's "occupy" movement — at least for the near future.

Thursday morning, Hong Kong police started to break down barricades and clear the streets at the main protest site. A recent court order allowed authorities to step in after more than two months of the so-called "Umbrella Revolution."

CNN spoke with a couple of protestors who said, while the current demonstrations downtown are coming to a close, the movement will persist.

The protestors told CNN, "I think it is the end of this movement, but the idea of democracy will still spread to the whole of Hong Kong."
"It's not about only occupying Central. ... I think it's a long-term movement."

Despite the large turnout Wednesday night, numbers had been dwindling lately compared to the more than 100,000 people who occupied the city during the demonstrations' peak in early October. (Video via RT)

The protests began in late September after Hong Kong's legislative body announced voters in upcoming elections would only be able to choose from candidates who had been screened by Beijing, which came up short of the promise of universal suffrage. (Video via Euronews)

There were clashes with police from the beginning, with pro-democracy protestors storming a Hong Kong government complex days into the protest.

A month later, police and protesters faced off again, with officers using pepper spray to disperse crowds in the Mongkok neighborhood after the protests resurged.

At one point, there had been plans to negotiate a deal between protest leaders and high-ranking officials, but with Beijing unwilling to change the screening rule, there wasn't much room for agreement.

And it still doesn't look like the Chinese government plans to change course: pro-Beijing lawyers have argued that universal suffrage doesn't include the right to nominate who you want.

But, according to one leader of the Hong Kong Federation of Students, the protestors don't plan to stay quiet.