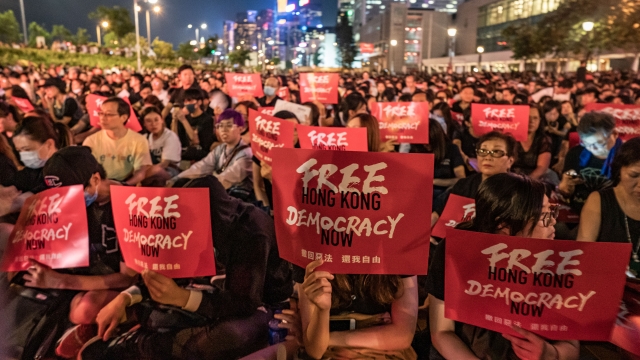 The petition asks the leaders to demand a full withdrawal of Hong Kong's extradition bill, and an investigation police brutality.

A Hong Kong pro-democracy protester declared in front of the U.S. consulate: "President Trump and Consular General Tong, we are here on behalf of a group of students, young professionals and Hong Kongers we sincerely plead for your urgent attention to what is known as the extradition bill."

On Wednesday morning, protesters in Hong Kong peacefully marched to all of the G-20 country consulates, excluding China. Protest leaders gave each consulate a petition asking the nation to bring up Hong Kong's pro-democracy demands at the G-20 summit in Japan this weekend: it includes full withdrawal of the controversial extradition bill, and an investigation into police brutality during recent protests.

"I hearby ask you in the name of fellow Hong Kongers to further extend our plea to bring up the Hong Kong situation at the G-20 summit, that Prime Minister Theresa May stands beside Hong Kong's promised autonomy for the sake of British nationals in Hong Kong," a protester told Esther Blythe, Deputy Head of the British Consulate.

Peaceful protests continued into the night. Over a thousand protesters chanted "Free Hong Kong!" and "Democracy now!" in the languages represented by the G-20 nations.

Protesters told Newsy they are holding out hope that the U.S. in particular take up the cause.

College student Desiree Lam said, "America has a really huge impact on the world and basically if he can try to convince China to do something about this, it would be great."

Another college student, Edison Chan, said, "It's the most powerful country that can put pressure to China and it will be helpful if they put some economic pressure or some economic blocks on it."

U.S. Secretary of State Mike Pompeo told Fox News earlier this month he was sure President Donald Trump would bring up the protests to Chinese President Xi Jinping when they meet along the G-20 summit's sidelines. But on Tuesday, China's foreign ministry said it "will not allow" a discussion about the protests.