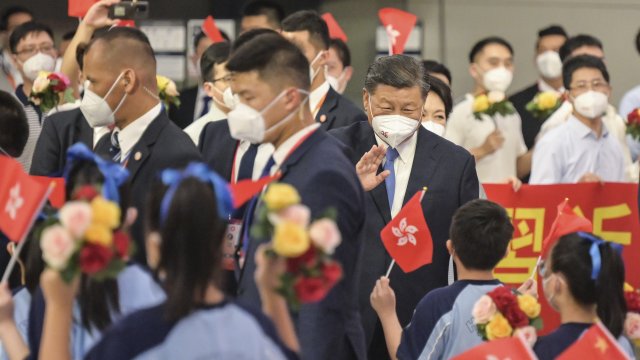 Some say Hong Kong's anniversary is a celebration of change, but many locals say it highlights the city changing for the worse.

Hong Kong is draped in banners, a sea of red for the start of a new era, to promote a pledge from its new leader to transform the city’s fortunes.

"My team and I will reach out, listen to and communicate with the public with sincerity," said John Lee, Hong Kong chief executive. "We will be proactive in winning the trust of the people and make policies that meet their demands.”

"As a citizen of Hong Kong, I love to see stability," said Innes Tang, Politihk social strategic chairman. "I love to see a prosperous Hong Kong, and that’s what I'm expecting from the next administration."

But not everyone is so optimistic.

The recent election of John Lee as chief executive has also caused controversy.

The city’s former security chief was appointed – without opposition – by a committee stacked with pro-China loyalists.

Britain claimed Hong Kong during an Opium War in the 1840s and signed a treaty with China that gave it control of the territory until 1997. But new high-school history textbooks in Hong Kong are set to teach that China never recognized that agreement and that the city was never a British colony.

That’s become a tipping point for local families, like one emigrating to the U.K. in a few weeks.

"The current education system is only spoon-feeding students with selected knowledge that the government wants you to know," an anonymous mother said. "That’s not full and rounded for the kids, and it limits their minds, creativity and inspiration."

Education experts say the changes are causing worries over self-censorship.

"The kind of uncertainty the current situation has been causing within the community and the education sector is, 'Can we do this? Can I talk about this? Oh no, I better not talk about this for fear of something,'" said Dr. Edmond Law, adjunct professor at The Education University of Hong Kong.

A survey from the American Chamber of Commerce in Hong Kong found more than half its business-leader members said they were considering leaving the city because of the government’s strict COVID-19 rules.

For the past 18 months, all new arrivals have had to spend at least a week undergoing mandatory quarantine in a hotel room before being allowed into the city.  That’s decimated the tourism industry and hammered the local economy.

The government says it's working on a strategy to reopen the borders, but there are growing concerns that even if that does happen soon, it may take a lot more work to restore Hong Kong’s international reputation.