Hong Kong's Continued Protests Are Taking A Toll On The Economy 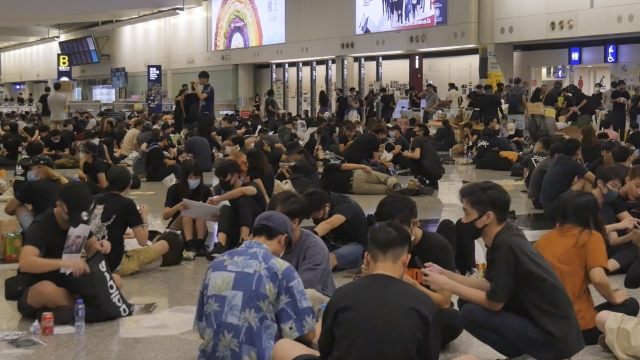 Continued protests against a proposed extradition bill in Hong Kong are taking a toll on the region's economy.

"And why is this important? Why do you want the airport?," a reporter asked.

"The airport is the way to connect to the other countries, and, more importantly, the airport generates huge economical benefits to Hong Kong and if we occupy it, it would cost a huge administrative cost for the Hong Kong ... government," Yuen said, preferring not to provide his first name.

The cancellations were a further blow to the region's economy. Cathay Pacific — Hong Kong's main airline — shares closed some 5% lower than normal Monday, continuing a downward trend. The airline's shares are down some 11% since the beginning of the year.

Cathay Pacific has said it may fire staff who "support or participate in illegal protests" in Hong Kong.

The region's Financial Secretary Paul Chan previously wrote in a blog post that the first quarter of this year was the "worst quarter in the past decade." He said the protests have "damaged Hong Kong's international image and business environment. For foreign companies and tourists, Hong Kong seems to have become turbulent and insecure, affecting their desire to travel, do business and invest in Hong Kong."

And the second quarter's gross domestic product grew at a much weaker pace than expected — 0.6% compared to last year, according to preliminary figures released by Hong Kong's government. CNN says it's the weakest figure in a decade.

This is all kind of a big deal since the region is ranked among the world's top three financial hubs — following New York and London.

A spokesman for China's Hong Kong and Macao Affairs Office of the State Council said the protests have "constituted serious violent crimes and have begun to show signs of terrorism." He said they are a "gross violation of the rule of law and social order in Hong Kong" and must be "resolutely cracked down in accordance with the law."