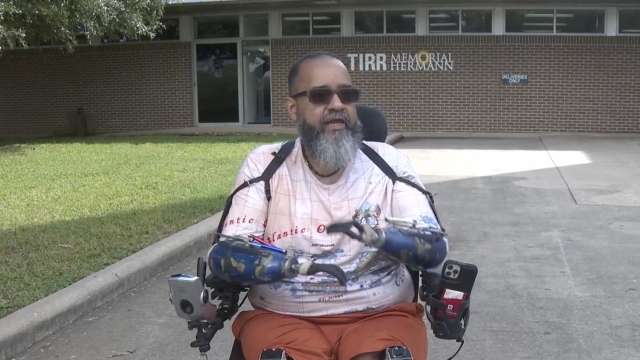 New surgical procedure at a Houston hospital increases success of people getting prosthetics.

Jeff Chaffin served his country in Iraq in 2003, but the Marine Corps didn’t allow him to reenlist.

"So, I went to the recruiter, I was like, 'Hey, here's my reenlistment package. Put me back in, coach.' And they had no interest in getting me back in," said Chaffin.

He thought he had found a perfect fit in life with the armed services.

"Transitioning from military to civilian was not easy," Chaffin said.

Post-traumatic stress and alienation took their toll, then a motorcycle accident took his leg.

And thus began Chaffin’s yearslong struggle, finding where he fit in personally and finding a fit replacement for most of the leg he lost.

"So, I went to the prosthetist, I took the leg off, I threw it all at him, left blood on the floor, and I hopped out," Chaffin said.

Chaffin is an above-the-knee right leg amputee. He cast aside a socket system prosthetic leg in favor of crutches or a wheelchair.

"It was too slow, too painful. And so he had decided to use a wheelchair full time. So, he hadn't used a leg in probably 13 years when osseointegration became known to him," said Kristin Reeves, Chaffin’s physical therapist.

"The socket is just a plastic or carbon fiber bucket that you put your residual limb into. And there's just inherent problems with that soft tissue envelope, the chafing, the blister formation, loss of fit," said Dr. David Doherty, an orthopedic surgeon at TIRR Memorial Hermann Hospital in Houston.

Doherty is affiliated with TIRR Memorial and UTHealth.

The hospital is one of the few in the U.S. that performs a procedure called osseointegration, which a Swedish doctor first conceived in the 1950s. It was experimental surgery until the FDA approved above-the-knee femoral implants in 2020.

Doherty is among a small group of surgeons who can implant titanium into a femur and develop it into a working joint.

17-year-old Benjamin Choi used his time during the pandemic to invent a low-cost gadget that uses artificial intelligence to interpret brain waves.

Chaffin's bone has fused into the rod, making it stable. He can now click his leg into place and walk with little discomfort.

"It’s very intuitive — once you get through the mental block of balancing on a stick," said Chaffin.

There are risks of infection around the implant that protrudes from the body.

"If we use the correct techniques, if we're able to achieve adherence between the skin and the bone and we perform the procedure in the appropriate patient who is a good host with an excellent immune system and good vascularity, then the situation of infection rarely occurs," said Doherty.

The procedure is rare, but it is gaining traction in orthopedic medicine.

"I went into septic shock. And as a result of that, I ended up losing all four limbs. I became a quad amputee," said Wayne Mooreheard, an osseointegration implant recipient.

Moorhead said the implants give him a freedom that doesn’t just involve movement but also choice.

"That choice is freeing. It allows me to be who I want to be. Like you said, if I don't feel like wearing the leg — I have a four-hour drive back to Louisiana when I'm done here; I'm going to take the legs off. I'm not gonna ride with them for four hours," said Moorhead.

A better fit for Moorhead and for Chaffin’s long walk for physical fullness.

"As soon as I was able to stand up on this leg, I knew something was different," said Chaffin.

And for mental health, "I felt it in every ounce of my being. I could tell that there was something different with this leg," Chaffin said.